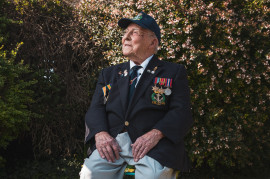 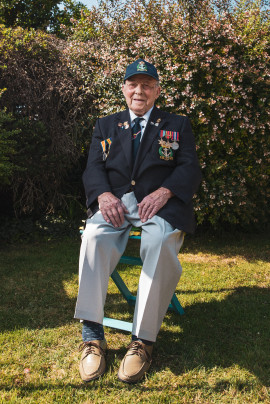 While millions celebrated the end of the war in Europe, thousands of Royal Navy sailors were fighting on halfway around the world. And even after the Japanese surrendered in mid-August 1945, many would not return home for months or even years.

Sailors like George Coring, who joined up and found himself on an escort carrier steaming to join the British Pacific Fleet in Australia via Ceylon, now Sri Lanka.

His ship, HMS Activity, acted as an aircraft ferry, transporting planes from one base to another, and was not directly involved in front-line fighting, though she did pick up nearly 100 survivors from an American merchantman sunk by U-boat off Australia in March 1945.

Their stay in Sydney was brief (though long enough for George to be ‘adopted’ by the Harris' – Mrs Harris’s husband was a Great War Navy veteran – and the British visitors were treated to big eats, picnics and outings).

Activity was in Trincomalee when the war ended in August.

“I remember – it was a celebration really. You couldn’t have a do because you had no beer on board, so we had a singsong,” said George.

With the fighting over, Activity steamed to Singapore, where George witnessed the formal surrender of Japanese forces in South East Asia, taking part in the victory march-past.

Prisoners of war were welcomed on board Activity and other ships in the damaged port: “Aussies and English – they stayed aboard us for ten days. They’d be sleeping in our hammocks and we’d be sleeping on the deck,” said George. Some shipmates taking pity on the skinny, traumatised men were warned by their captain that slipping them too much food could be harmful – but they could have cigarettes…

George said many of the POWs were in states of distress, so he and his shipmates tried to raise morale with singsongs – George was a dab hand with an accordion.

When Activity left Australia there was a sense of anticipation on board: “With the war being over we were rubbing our hands – ‘we’re going home…’,” said George.

But it was not to be for George.

He left the ship in Colombo and ended up at the Ceylon West Transmitting Station, and also did a stint as an airfield guard at Trincomalee. He edged closer to home when he took passage on sloop HMS Wild Goose to Basra, but then spent months in the Gulf in sister ship HMS Wren. He finally got his orders to head home in the spring of 1947, and a cable back to his girlfriend’s family triggered preparations for a wedding.

“Three weeks’ sailing; I came home on Saturday and got married the following Saturday – June 7 1947,” he said.

Britain had moved on in the two years since the end of the war, and as with many who manned the Forgotten Fleet there was no widespread celebration on their return.

“There was no cheering for us; when you see ships come home you see all the girls cheering, their in-laws, cheering them in – we had nothing like that.” said George. “We just came into Liverpool, came ashore, on the train and down to Portsmouth. That was it. There was no celebrations from the Navy point of view, or anybody’s point of view, when we came home. But lots of others came home, in the Army and all that kind of thing, besides us, you know?

“In those days you didn’t care, because you were home, that was the main thing.”

George’s self-taught musical talent was given another airing at the wedding breakfast, when he banged out some songs on the piano.

“I was a one-man ENSA (Entertaining National Service Association) me, and it was not just me – there were a lot of one-man bands, with guitars and accordions as well. I landed up 45 years playing in East End pubs at weekends – Fridays, Saturdays and Sundays. When I first started, I used to get £2.50 a weekend. Fifty bob. That’s Friday night, Saturday night and Sunday night.”

After his wedding, George was sent north to the HMS Ariel training camp near Warrington, as corporal of the guard.

He was then demobbed in a bus garage in Portsmouth: “I got all my gear, then caught the train home to London.”