On Sunday 11th June the National Chairman Keith Ridley visited S/M Philip ("Pip") Harrison to congratulate him on his 102nd birthday on behalf of the Royal Naval Association.

Pip is a member of RNA St Neots and District Branch.

Pip joined the Royal Navy in 1940 at HMS GANGES and served as a signalman until he was commissioned in 1943 and went on to be promoted to Lt. RNVR before being demobbed in 1946.

Pip was on both Russian and Malta convoys and took part in the famous Operation Pedestal in which the American tanker Ohio was bombed and caught alight. Following the fire being extinguished it was lashed to two Royal Navy destroyers who took it into Grand Harbour and was one of the first oil tankers to reach Malta, who desperately needed fuel.

On leaving the Royal Navy Pip became headmaster of a local school. 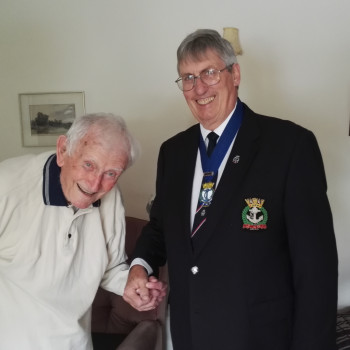