The Changing of the Guard at Buckingham Palace also brought a Changing of the Service as the Royal Navy took over security at Royal palaces from the Army for only the second time in history.
Sentry duties for the Senior Service started mid-morning on 25 November when a contingent of 35 officers and ratings replaced Grenadier Guardsmen.

The following day a similar ceremony took place at Windsor, 20 miles west of the Palace, where a contingent of sailors marched out of Victoria Barracks, led by the Band of HM Royal Marines, and made their way to Windsor Castle, where they took over from the 1st Battalion Welsh Guards
Over the three-week period just over 100 sailors will carry out their duties at Buckingham Palace, St James’s Palace, the Tower of London and Windsor Castle, concluding on 19 December.
The men and women of the Royal Navy – representing three of the five Fighting Arms, the Surface Fleet, Submarine Service and Fleet Air Arm – have stepped in to help out the Army as many of the Foot Guards battalions are busy overseas on operations or training for future contingencies.
In order to fulfil their duties, the sailors drilled and practised extensively, often on the parade ground and the roads around Whale Island in Portsmouth – practise which culminated in a ‘Fit For Role’ parade assessed by the guardians of State Ceremonial, the officers of the Army’s Household Division.
The crucial parade at Wellington Barracks in London, close to Buckingham Palace, was the final inspection to ensure the Royal Navy was ready to take the place of the Army regiments.
And the matelots proved their mettle, with Lt Col Guy Stone, Brigade Major of the Household Division, saying: “They were well turned out, confident of all guard change formats and clearly enjoying the experience.”
The Officer Commanding the Royal Navy Guard, Lt Cdr Richard Dobson, said: “This will be an intense and memorable experience for all of us at the end of several weeks of ceremonial duties training, just eight or nine days of it specifically on palace guarding, and could be regarded as the pinnacle of my professional career which began as a rating in 1990.
“The instructors from the guards could not have been better; for those eight or nine days they really put us through our paces and prepared us thoroughly for our Fit For Role inspection last week, enabling us to mount guards today.”
Square-bashing and drill was still fresh in the minds of some sailors, as the palace duties follow closely on from the Remembrance parades at the Cenotaph and Royal British Legion Festival of Remembrance in the Royal Albert Hall.
Only after the November ceremonies were concluded could training focus on guarding.
And that training continues through their month in London, as well as keeping their uniforms in top condition.
Royal Marines also have a role to play, with bandsmen and women providing music to accompany ceremonies at the palaces and castles.
Lt Cdr Dobson volunteered to lead the contingent when he discovered the Royal Navy was going to mount guards again, having heard from colleagues about the success of the previous venture and the sense of personal achievement and pride that comes with being Captain of the Queen’s Guard.
The Royal Navy last mounted guards in 2017, and jumped at the chance to do it again as such opportunities have not been too frequent – before 2017 the last sailor to have taken the role of Captain of the Queen’s Guard is thought to have been Sir Walter Raleigh in 1587…

Sentries will come to attention every ten minutes, slope arms  and march across their post – around 20 paces or so.

Having repeated that four or five times, the guard returns to his or her station, shoulders arms and returns to standing at ease.

Sentries do not stand easy while at their post – the orders read out to them at the start of their stint include the facts that they ‘may not eat, sleep, smoke, stand easy, sit or lie down during your tour of duty.’
Our images, taken by Royal Navy photographers, show sailors and Royal Marines bandies taking over sentry duties at Buckingham Palace and Windsor Castle
© UK Ministry of Defence CROWN COPYRIGHT 2019 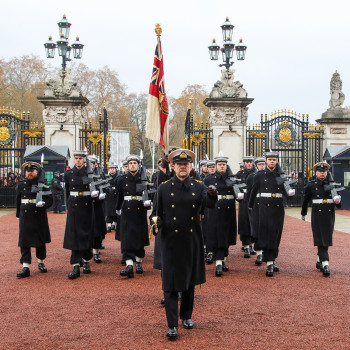 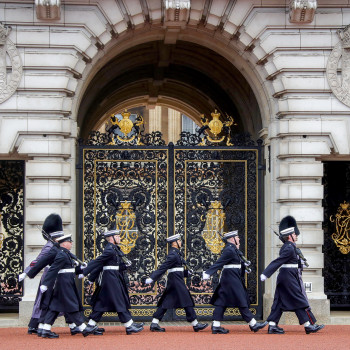 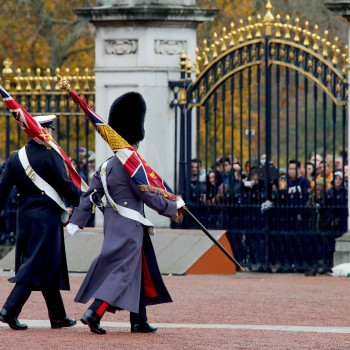 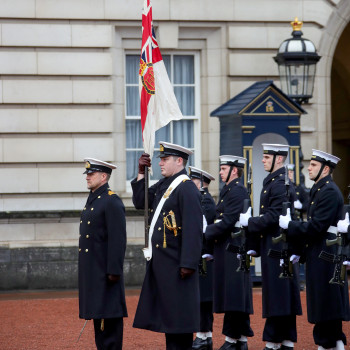 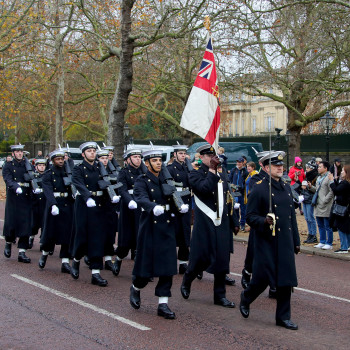 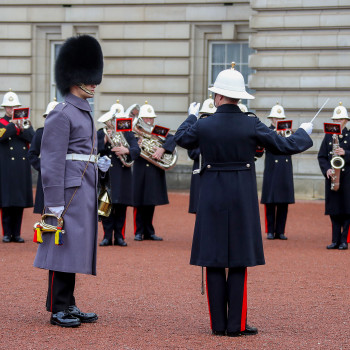 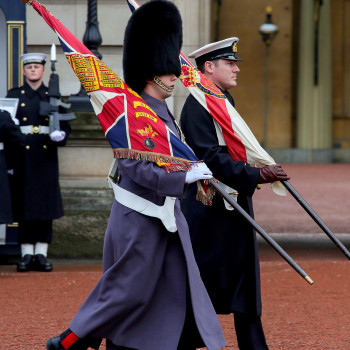 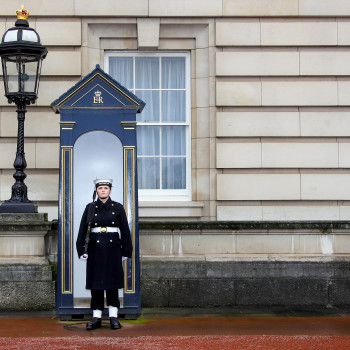 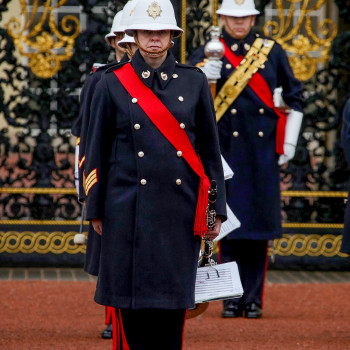 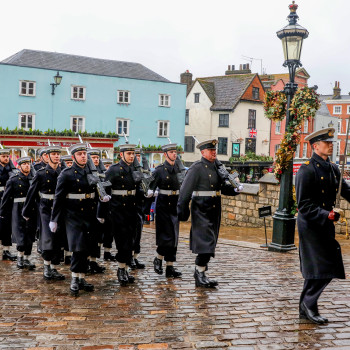 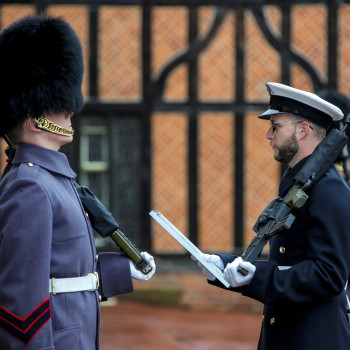 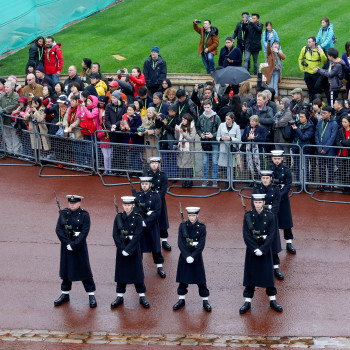 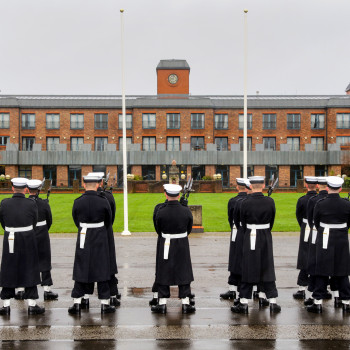 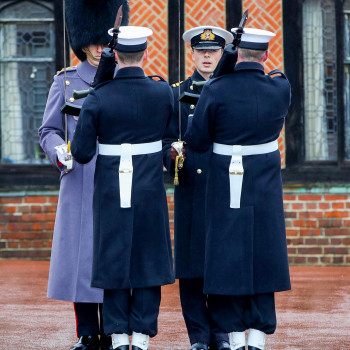 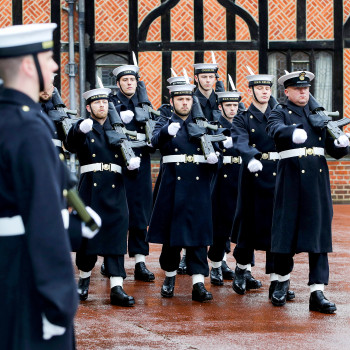 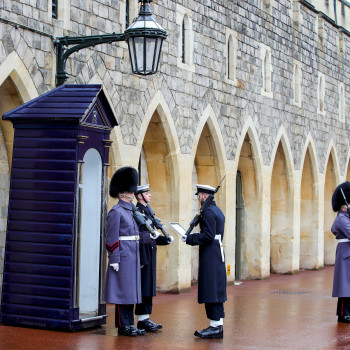 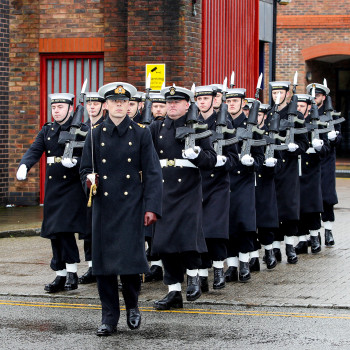 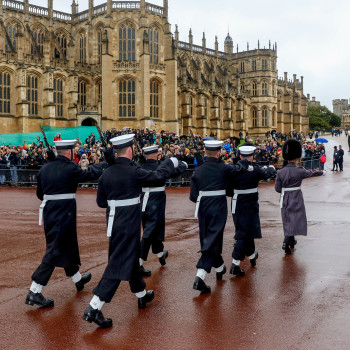 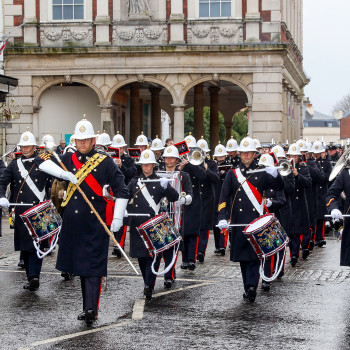 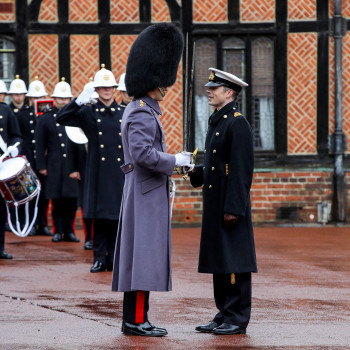 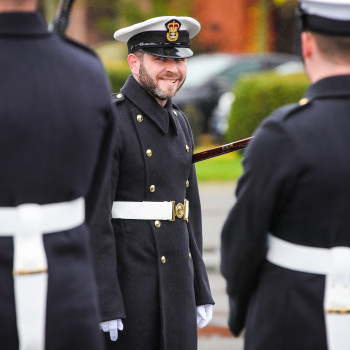 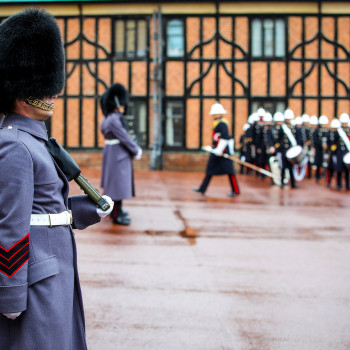 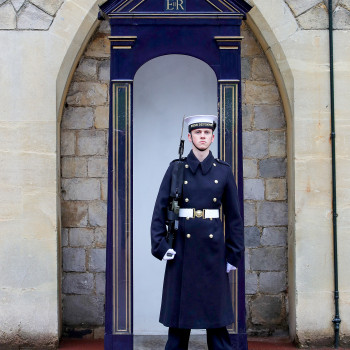 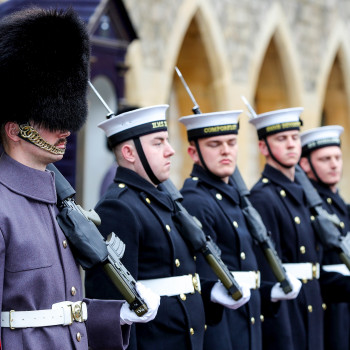 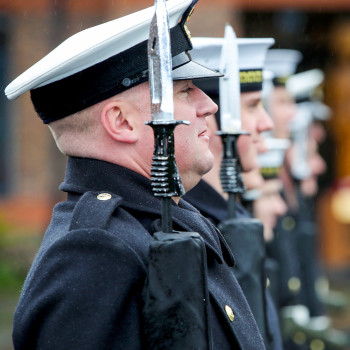 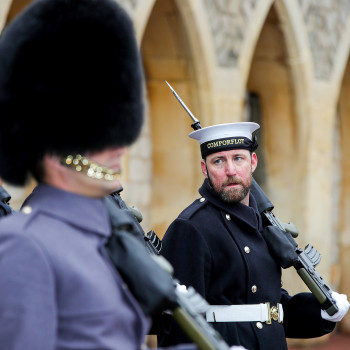