Honorary Commodore in Chief of the RFA, HRH Prince Edward the Earl of Wessex KG, GCVO, was in Portsmouth today to welcome RFA Tidespring to the operational fleet.

The new 37,000 tonne ship, one of the four biggest tankers to be purpose built for the RFA, recently arrived at HM Naval Base Portsmouth in preparation for her official acceptance into operational service. Once in service with the RFA, she will provide fuel, food and stores for Royal Navy warships all around the world.

RFA Tidespring is the first of class of the Military Afloat Reach & Sustainability (MARS) Tankers and together with her three sister ships Tiderace, Tidesurge and Tideforce, are flexible, state-of-the-art double hulled vessels, which will provide key future support to the Queen Elizabeth Class Aircraft Carriers.

“Tidespring’s arrival into the Royal Fleet Auxiliary today is an exciting milestone in the history of the RFA. She is a tangible demonstration of the success of the MARS Tanker project which is delivering first-class global support for a first-class global Royal Navy.” 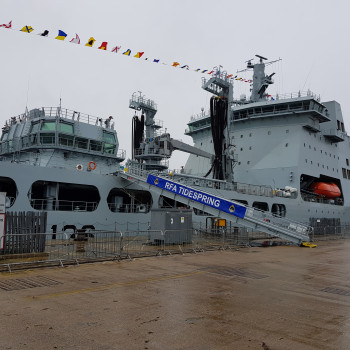