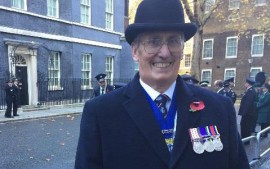 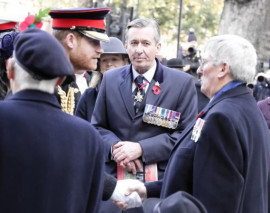 I would like to start by thanking my fellow Shipmates of the National Council for re-electing me again and S/M Paul Stephenson for a fourth term as your National Chairman and National Vice Chairman respectively. It is indeed a great privilege to serve and represent you the members throughout the year.

The time has come again when the Bridge Lookout has reported that the Festive Season is just over the horizon as is HMS QUEEN ELIZABETH on her way back home from the USA and flying trials to berth ahead of her Sister Ship HMS PRINCE of WALES in Portsmouth Naval Base. Both Ships will be alongside in December with HMS PRINCE of WALES being commissioned into the Royal Navy on 10th December, which will mark the 78th anniversary of the sinking of her predecessor which was lost in action alongside HMS REPULSE in 1941. It will be a proud day for the Navy and indeed all of us. Furthermore, as I write this article, the Royal Navy has just taken up Ceremonial Guard Duties at the Royal Palaces & Residences for the second time, what a great honour for the Navy.

Where has the time gone this year? It certainly has been a very busy one for me with Area & Branch visits and an ever growing email bag! Some queries and problems could have been answered or resolved simply by reading the RNA National Rules & Bye-Laws which can be found on the RNA National website. However, not only as your National Chairman but also a National Council Member, and like all National Council Members we are here to help and give advice as and when needed.

It has been a busy year dealing with various problems associated with Clubs and their relationship with a Branch and vice versa. In the coming months the National Council will be looking at a strategy for assisting and liaising more closely with Clubs.

Looking through the various Facebook Posts by Branches & Shipmates, it was interesting to find that so many Branches have been out & about flying the RNA Flag, having fun and enjoying themselves at so many events be them fund raising, but more recently, Trafalgar Night Celebrations. Keep it up. During the period of Remembrance, it was heartening to see the dedication and good work of Branches paying their respects at the numerous Parades & Services held throughout the country. I thank Dublin, Rayleigh & Rushden Branches for inviting me to their Dinners all of which were very well organised. On 7th November at Westminster Abbey Field of Remembrance I was introduced to both Prince Harry and his wife Meghan. The Duchess took an interest in the RNA speaking with me for some 3 minutes. On Remembrance Sunday I was most honoured to represent the Association at the Cenotaph in London where I laid a Wreath on behalf of all Naval Veterans and subsequently met many Shipmates at the Civil Service Club for a few wets.

For a second year the Minor Grants made to Branches from the Branch & Club Support Fund has proved a great success with many Branches having applied for and been given grants of up to £250 and in exceptional cases £500. I am pleased to report that provision has been made within the budget for 2020 to run the scheme for a third year. Just to remind Branches, the General Secretary Bill Oliphant is authorised to make grants up to a maximum of £250 to assist with, but not restricted to; recruitment, publicity, purchase of a Gazebo etc. Applications & administration of the scheme have been kept to an absolute minimum. A simple email to Bill Oliphant – bill@royalnavalassoc.com setting out the reason for the application is all that is required.

Is your Branch independently registered with the Charity Commission? If so, I must ask Branch Secretaries or Treasurers to log online and check that you have submitted your annual return. This year the process will take slightly longer as the Commission requires a compulsory update of Trustees, although the information required is fairly basic and simple.

Project Semaphore has now issued some 850+ iPads and has made an amazing life change to those who now possess one. Project Manager, Sarah Clewes is still looking for digitally isolated naval veterans to issue iPads t, so please keep your ears and eyes open for potential recipients. Details please to Sarah at Central Office – sarah@royalnavalassoc.com

To our serving Shipmates in the Fleet, which includes the Royal Marines, all Shore Establishments and Naval Units, please let Andy Christie andy@royalnavalassoc.com at Central Office have any dits you have, or better still submit news from your Ship or Establishment for inclusion in the Association’s Semaphore Circular as we want to hear from you.

To those on Deployment may you have safe passage and a safe return. In closing, my wife Maureen and I wish you all a Happy Festive Season and a Happy, Healthy and Prosperous New Year. To all Shipmates onshore, I would ask you all to spare a thought over the festive season to remember all service personnel and support staff who will be on duty protecting our great nation and who will be parted from their families and love ones.