The repercussions of the deadly Argentine air attacks of 8 June 1982 were still being felt two day later, with Landing Ship Logistic RFA Sir Galahad still smouldering in Bluff Cove and survivors from the bombing – mostly 1st Battalion the Welsh Guards, many of them horribly burned – having been transferred to hospital ship HMHS Uganda off Cape Dolphin, the most northerly part of East Falkland.

But despite the attack, by Thursday 10 June most of the assault formations of 3 Commando Brigade and 5 Infantry Brigade had reached their starting points for the final push on to Stanley, along with their equipment such as artillery guns, and stores.

Supporting gunfire from warships was an essential part of the plan, and in order to provide that support they would have to venture deep into Berkeley Sound, a wide inlet on the eastern coast of East Falkland, to the north of Stanley.

Concerns over the presence of mines in these waters prompted British commanders to task one of the 11th Mine Countermeasures Squadron – deep-sea trawler HMS Pict, one of five such ships taken up from trade – to sweep a safe path through the sound on the night of 10 June, supported by HMS Cordella.

All non-essential members of Pict’s crew were transferred to Cordella at the mouth of the sound, then Pict edged her way deploying her specialist sweeping gear – which promptly failed.

But with Operation Corporate depending on the safe passage of warships, Pict’s Commanding Officer, Lt Cdr David Garwood, ordered that all machinery should be switched on and made as noisy as possible and the main engine revved hard while the trawler weaved her way along a specific number of runs through the area.

Fortunately the bold tactics did not discover (and set off) any mines, and when Pict left the sound the remainder of her crew rejoined her,

Earlier in the day, before dawn, frigate HMS Yarmouth had carried out a particularly successful bombardment  of Argentine troops, and the remainder of 10 June saw much the same steady avctivity that had been apparent almost since the first landings in San Carlos Water on 21 May., with the logistics operation in full swing.

The appearance of supply ship RFA Fort Grange in San Carlos Water was particularly welcomed, as she carried much-needed food supplies for the assault troops as well those supporting the amphibious operation.

Argentinian air attacks were low-key on 10 June compared with 8 June; four Pucara planes carried out an unsuccessful raid on British artillery positions near Mount Kent, while later that day more waves of Argentine planes were picked up on Type 42 destroyer HMS Exeter’s long-range raider, but a rapid and numerically-superior response by British Sea Harriers prompted the Argentine pilots to turn round and head back to their home bases.

There was one British fatality in 10 June – a member of the SAS was ambushed in his observation post on West Falkland when it was spotted by Argentine troops. His was the only recorded death on West Falkland during the conflict.

Today’s image from the Imperial War Museum collection (© IWM FKD 328) shows troops of 5 Infantry Brigade at Fitzroy on the south coast of East Falkland, from where one element of the assault on Stanley was being supported. 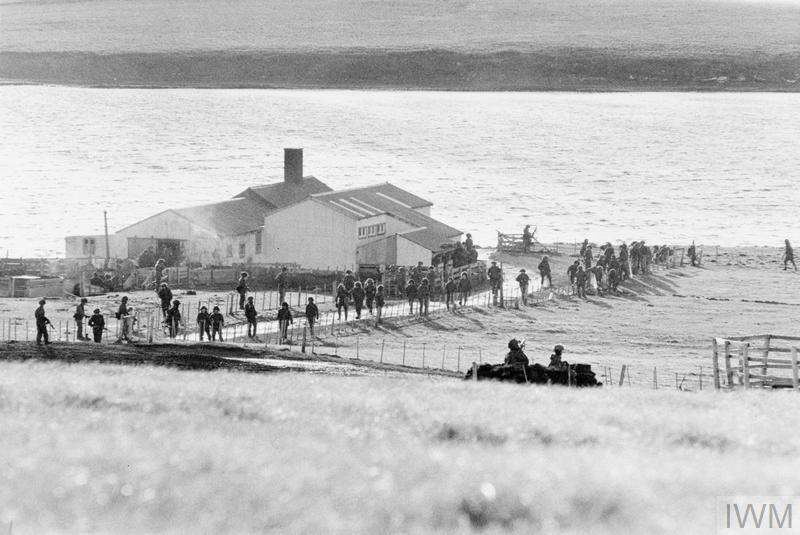