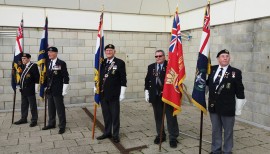 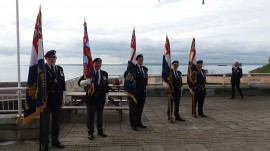 Considering the very short notice 10 standards from No 3, No 4 area and other associations which included the Merchant Navy, HMS Ajax Battle of the river plate veterans and Fleet Air Arm veterans, ensured the occasion a very worthwhile event.  22 veterans also made up a fine body of men to greet the South African armed forces as they arrived through the flanks of standards.

I add an abridged history of the disaster:

on January 16, 1917 the Mendi troopship sailed from Cape Town en route to La Havre in France carrying the last contingent of the SANLC comprising 805 black private, 5 white officers and 17 non-commissioned officers as well as 33 crew members. On the morning of 21 February 1917, another ship, the SS Darro (10,0000 tons) travelling at full speed and emitting no warning signals, rammed the SS Mendi (4, 230 tons), which sank in 20 minutes. No steps were taken by the SS Darro to lower boats or rescue the survivors. She stood off and floated nearby while lifeboats from the SS Mendi escorting destroyer, HMS Brisk, rowed among the survivors, trying to rescue them.  The loss of life is thought to be between 650 and 800.