12 June: Troops advance on land, but Glamorgan struck by Exocet

As the struggle for control of the Falkland Islands entered the final stages on Saturday 12 June 1982 British forces took more casualties on land and at sea.

Overnight on 11-12 June three formations were slowly forcing back Argentine troops as they fought to take three areas of high ground that formed a defensive arc to the west of the capital, Stanley.

3 Para were the furthest north, inching their way up Mount Longdon with a view to possibly pushing on towards Wireless Ridge, but progress was slow in the face of dogged opposition, with both artillery duels and hand-to-hand combat, and having taken Longdon by dawn the decision was made to dig in and prepare for the next advance.

Their move up the slopes had been helped by the main gun of Type 21 frigate HMS Avenger, which fired more than 150 4.5in shells at Argentine positions throughout the night, but their advance, which had been initially pushed back, cost the lives of 23 men on the night and in the subsequent Argentine artillery bombardment.

The gallantry of Sgt Ian McKay in attacking a particularly dangerous machine gun post with just three other men – one of whom also died – resulted in him being posthumously awarded the Victoria Cross.

To the south-west of the Paras were the Royal Marines of 45 Cdo, who were tasked with taking Two Sisters Mountain, and who found the opposition just as tough as the Paras had.

Their advance was covered by the guns of County-class destroyer HMS Glamorgan, which had been on the gunline south of Port Stanley since before midnight local time.

Glamorgan and frigate HMS Yarmouth put more than 400 shells onto Two Sisters and Mount  Harriet, further south, during the night, withdrawing at around 0530.

45 Cdo had started their attack a couple of hours late and quickly ran into stiff resistance, but by judicious use of heavy weapons, sheer tenacity and courage they bludgeoned their way through to their objective on the morning of 12 June for the loss of eight men dead.

A bid to move on to Tumbledown Mountain, closer to the outskirts of Stanley, was knocked back, so the commandos dug in and sought what protection they could from Argentine shelling.

Mount Harriet was a slightly more straightforward proposition as 42 Cdo managed to get within 100 metres or so of the enemy before they were spotted.

Heavy artillery support from sea and land suppressed Argentine defences on the peak to the extent that casualties were remarkably low – one Marine, Cpl Laurence Watts, died in the attack, and another, Cpl Jeremy Smith, was later killed by artillery fire – though there was still much fierce close-quarters combat and numerous injuries amongst the British from machine-gun fire and artillery before the objective was achieved around daybreak.

The casualties at sea were suffered on board HMS Glamorgan as she withdrew from the gunline and prepared to head back to the carrier battle group.

Well aware of the threat of land-based Exocet missiles, taken from Argentine warships and mounted on lorries, British commanders had set out danger zones around the coast which warships avoided when moving around East Falkland.

It is thought that the Argentines had managed to move one of their launchers further east towards the shore, so while Glamorgan passed that point around 20 miles out to sea, just outside the perceived danger zone, an Exocet was successfully fired.

Avenger, in company with Glamorgan, spotted the missile and raised the alarm, but all Glamorgan could do was turn sharply to present her stern – the strongest part of the ship – to the threat.

The missile glanced off the edge of the upper deck, slid along and exploded near the hangar, killing eight sailors and destroying her armed and fully-fuelled Wessex helicopter, while blowing a hole in the deck through which burning fuel poured, starting fires which killed a further five men.

A 14th man died of his injuries two months later.

Though the gas turbines were temporarily put out of action, within three hours or so the fires were contained and the ship’s steam turbines used to move her out of the danger area and out to the carrier group.

In doing so, Glamorgan had gained the somewhat dubious honour of being the first ship to survive being struck by an Exocet.

Other activity on 12 June included the seventh and final Operation Black Buck, which saw an RAF Vulcan bomber flying out of Ascension Island to hit Argentine troop positions and air assets at Stanley airfield with 1,000lb bombs, though most missed their targets.

Ferry MV Norland arrived in Montevideo on 12 June, landing more than1,000 Argentinian prisoners of war, who were swiftly repatriated west across the estuary of the River Plate to their homeland by the Red Cross.

Ambulance ship HMS Hecla set off from the Falklands for Montevideo on the same day carrying wounded combatants.

Around the coast of East Falkland the British build-up was continuing apace, with Landing Ship Logistic RFA Sir Percivale unloading supplies at Teal Inlet to the north-east of Stanley.

STUFT vessel (Ship Taken Up From Trade) MV Geestport was unloading her cargo in South Georgia on 12 June, while troopship Canberra took on fuel of various sorts – oil for her engines from tanker RFA Tidepool and food and beer for her passengers from Fleet stores ship RFA Stromness.

Another vessel involved in the campaign – nuclear attack submarine HMS Splendid – arrived back in the UK on 12 June. Apart from the obvious threat they posed to ships which effectively blockaded the Argentine fleet, British submarines also gained vital reconnaissance and early-warning information, lying off the coast and watching Argentine airfields for groups of attack aircraft taking off and heading to the Falklands 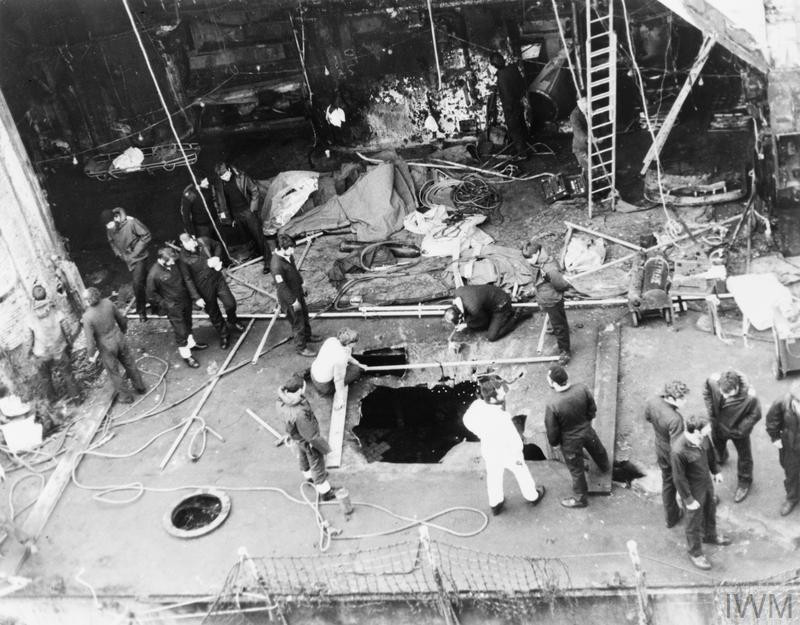