Wednesday  12 May 1982 could have seen the British task force in the South Atlantic lose a second Type 42 destroyer – but luck was on the side of the Royal Navy on this occasion.

HMS Glasgow and frigate HMS Brilliant – that 42-22 combination again – were off Stanley in the afternoon, with Glasgow having been lobbing 4.5in shells into Argentine military positions ashore since before dawn.

The weather improved enough through the morning for air strikes to resume after days of fog, low cloud and incessant rain, and both the British and Argentinians took advantage of the slightly better conditions.

The first into action were Sea Harriers from flagship HMS Hermes, which carried out a high-altitude attack on Stanley airfield.

Around an hour later it was the turn of Argentina with a raid by eight Skyhawk light bombers.

The first wave of four jets homed in on Glasgow and Brilliant as they lay a dozen or so miles to the south of Stanley – just as Glasgow’s weaponry started to play up.

Her Sea Dart system failed to launch its missiles at the incoming aircraft, but Brilliant  picked up the jets as they raced overland from the north-west, and activated her Seawolf system, with spectacular results – two Argentine aircraft were shot out of the sky by missiles while a third flew into the sea while trying to take evasive action.

The fourth dropped two 1,000lb bombs as it flew towards Glasgow, which was beam on to minimise the threat; the first fell harmlessly into the sea while the second bounced off the waves and cleared the gap between the destroyer’s mast and hanger, splashing harmlessly into the Atlantic beyond.

That Skyhawk also failed to return home. As it passed close by Goose Green on its way back to the mainland it was shot down by Argentine anti-aircraft fire.

By the time the second group of Skyhawks attacked, Glasgow’s 4.5in main gun, which jammed during the first wave, was back in action, while the pilots’ tactics prevented Brilliant’s Seawolf from locking on to their targets,

These jets were hardly more successful than the first wave; only one of the bombs released hit Glasgow, and even then it failed to detonate.

The bomb punched though one side of the hull, causing minor injury to a member of the ship’s company, before bursting out the other side and falling into the sea. There were no other casualties.

But there were now two large holes in the hull, barely a yard above the surface of the churning ocean, and into which the cold South Atlantic was cascading.

The destroyer withdrew from the gunline and returned to the carrier Battle Group to carry out repairs on the holes in her hull which, although not serious still posed a risk in the open ocean.

Britain did lose an aircraft on 12 May, when a Sea King helicopter from 826 Naval Air Squadron suffered an engine failure while in the hover some five miles from HMS Hermes.

The helicopter ditched and its crew was rescued before it rolled over and was finally sunk by gunfire from a British warship.

HM Hospital Ship Uganda took on her first patients since arriving in the Total Exclusion Zone surrounding the Falkland Islands – two dozen or so patients wo had been burned or injured in the Exocet attack on HMS Sheffield on 4 May.

One significant move on 12 May was made by Cunard liner Queen Elizabeth 2, which sailed from her home base of Southampton with much of 5 Infantry Brigade on board, heading initially for South Georgia.

Type 42 destroyer HMS Cardiff also set out for the South Atlantic on 12 May, sailing from Gibraltar to join the Bristol Group as it made its way to the Falkland Islands.

RFA Tidespring arrived at Ascension Island on 12 May with more than 150 Argentine prisoners of war from South Georgia, who were in the process of being repatriated.

Tidespring, which was accompanied by frigate HMS Antelope, picked up two Wessex helicopters at Ascension Island before the pair headed south again over the weekend to rejoin the main battle group.

A long-range patrol by RAF Nimrod from Ascension on 12 May took the aircraft to within 400 miles of the Falklands.

On the return leg, the RAF crew spotted an Argentine Boeing 707 which was seeking British forces, and was around 250 miles from the Antrim group, but as the Nimrod had no air-to-air missiles or cannon there was little it could do about the enemy 707.

Finally, on the land, a small party of Special Forces troops was landed by Sea King from HMS Hermes onto West Falkland in the early hours of 12 May.

These men would concentrate of gathering as much information as they could on the numbers and positions of Argentine forces around a potentially-dangerous airfield before joining colleagues later in the week for the raid on Pebble Island.

Today’s image from the Imperial War Museum collection (© IWM FKD 583) is of Type 42 destroyer HMS Glasgow, which escaped serious damage in an Argentine bomb attack on 12 May 1982. 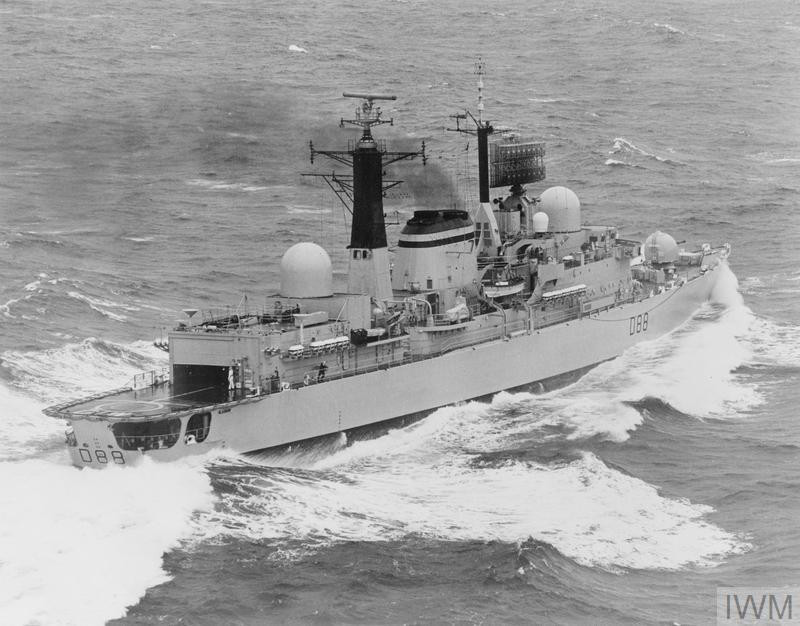