Having successfully taken Mount Longdon (3 Para), Two Sisters Mountain (45 Cdo RM) and Mount Harriet (42 Cdo RM) in the early hours of the previous day, it was the turn of 2nd Scots Guards, 1/7th Gurkhas and 2 Para on the bitterly cold night of Sunday 13 June to join the fray with the targets of Tumbledown Mountain, Mount William and Wireless Ridge respectively.

The objectives were three of several peaks or stretches of high ground within five miles or so of Stanley, and command of that high ground would open the way to the capital of the Falkland Islands.

The Scots Guards – bolstered by mortar detachments from 42 Commando Royal Marines, were flown by helicopter from Bluff Cove to Goat Ridge, a feature to the west of Tumbledown itself as commanders felt an approach across the peak’s open flank to the south would be too dangerous.

After a diversionary thrust, the main attack started at around 2100 local time, and as Sunday turned to Monday the Guardsmen had control of the western end of Tumbledown though their push eastwards was slowing down under increasing mortar and artillery bombardment.

To the north-east, 2 Para – by now back under the umbrella or 3 Cdo Brigade –  were joined by a troop of Blues and Royals, and began their advance on the evening of 13 June backed by an artillery  barrage and naval gunfire support courtesy of Type 21 frigate HMS Ambuscade.

By midnight the paratroopers were already well on their way to achieving their objective.

It was a frustrating night for the Gurkhas, however, as they marched to the north of Goat Ridge with the intention of building on the successes of the Scots Guards – as the Guards continued to battle for Tumbledown towards dawn on the morning of 14 June it was looking increasingly likely the Gurkhas would have to take Mount William in broad daylight.

Over this period – 12-14 June – three of the five ships of the 11th Mine Countermeasures Squadron were employed on covert operations, taking supplies to Special Forces teams who were operating along the coast of East Falkland.

Another resupply operation almost went badly wrong on 13 June – a long-range C-130 Hercules from Ascension dropped a string of cargo bundles at a pre-arranged location, but several of the parachutes failed to open and almost hit Leander-class frigate HMS Andromeda.

Luckily, the 22 men who parachuted into the sea did not suffer the same problems, and were picked up safely.

Also in the air were a clutch of Argentine Skyhawks, which set out to bomb the HQ of 3 Cdo Bde close to Mount Kent. Most of the bombs failed to explode, and the retreating jets also failed to bring down a Wessex helicopter at Teal Inlet, though the rotor of a Sea King was damaged by cannon fire; the helicopter was repaired and in the air again later that day.

A trio of Daggers had no more luck taking on HMS Cardiff’s Lynx south of the islands.

Later forays by Skyhawks were repelled by Sea Harriers on Combat Air Patrols, two of which which were forced to use assault ships HMS Fearless and HMS Intrepid as makeshift aircraft carriers when the rudimentary airstrip at Port San Carlos was put out of action by a Chinook’s heavy landing.

The RAF were later to contribute to the day’s business with an attack on Argentine artillery near Moody Brook using Paveway guided bombs, with some success.

And while commanders in the Carrier Battle Group, far out to sea, awaited news from the battlefield the normal business of keeping the ships topped up carried on as normal, with RFA tankers and supply ships replenishing frigate HMS Argonaut, troopship Canberra and destroyers HMS Exeter and HMS Bristol.

Battle Group Commander Admiral Sandy Woodward was keenly aware that his ships could not perform the tasks required of them much longer; in his book One Hundred Days, he lists the defects to weapons and propulsion systems on frigates and destroyers that left vital defences paper thin, though men and machines continued to push themselves to the limit.

Fortunately, 13 July was a day of respite for many of the warships, as the admiral records almost flat calm seas, gentle breezes and a glorious sunset – ideal weather, he noted, for an Argentine air attack which fortunately never materialised.

Today’s image from the Imperial War Museum collection (© IWM FKD 319) shows preparations for the assault on Mount Tumbledown which began late on 13 June 1982. Under fire, 2nd Battalion Scots Guards dig in below Goat Ridge. A Scorpion light tank of the Blues and Royals can be seen in the middle distance on the right. 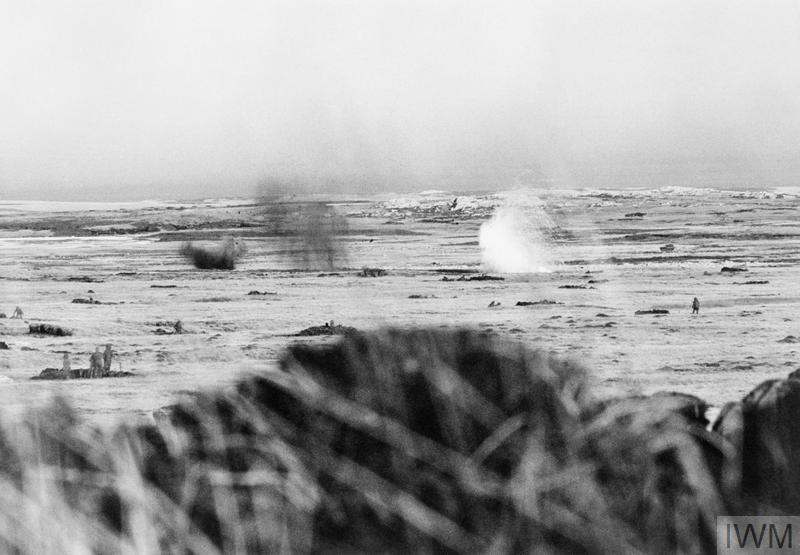