14 May: Pebble Island raid under way

Relatively benign (though still foggy) conditions allowed the British Carrier Battle Group to launch a Sea Harrier bombing raid on Stanley on the morning of Friday May 14, then three of the ships – flagship HMS Hermes, destroyer HMS Glamorgan  and frigate HMS Broadsword – prepared for a major strike against Argentine forces.

The flotilla set off late afternoon, by which time in typical South Atlantic fashion the fog had been blown away by a south-westerly gale, which meant the ships were sailing into Force 9 winds and a heavy sea.

Progress was slower than planned (so much so that the command team came close to calling it off – the mission had already been delayed once) and Broadsword had to slow down as she sloughed into the big swell.

There were also issues in launching the Sea King helicopters in the teeth of the gale, but eventually the aircraft were set up and flew off, carrying 45 members of the SAS and a small team of naval gunfire spotters toward Pebble Island, one of the smaller Falkland Islands lying to the north-west of the northern entrance to Falkland Sound.

Here there was an Argentine airfield, home to 11 ground-attack and reconnaissance  aircraft, which was in very close proximity to the proposed British landing beach at San Carlos Water.

The job of the SAS team was to destroy all 11 aircraft, allowing the landings to go ahead with a far greater chance of success.

The four Sea Kings landed their passengers on the northern coast of Pebble Island, around three miles from the airfield, and in the gale-force winds the saboteurs made their way towards their target in the early hours of 15 May.

Back in the UK there was still a mighty effort to prepare ships for the South Atlantic task group, and the latest result was roll-on, roll-off container ship SS Atlantic Causeway, which was on her way to join Operation Corporate loaded with eight Sea King and 20 Wessex helicopters from 825 and 847 Naval Air Squadrons.

The ship, sister to SS Atlantic Conveyor, had only been taken up from trade on 4 May and sailed into Devonport two days later to undergo a more thorough conversion than her sister, effectively providing the Royal Navy with a handy 15,000-ton auxiliary aircraft carrier complete with flight deck and hangar.

Supply ship RFA Fort Grange, whose refit had been accelerated and completed a month early, sailed from Devonport on 14 May with her own contribution to the campaign – three Sea Kings of C Flight 824 NAS were embarked.

Finally, back down in the southern hemisphere, HMS Hecla – one of three British ambulance ships – arrived on station with HMHS Uganda at the edge of the Total Exclusion Zone (TEZ). 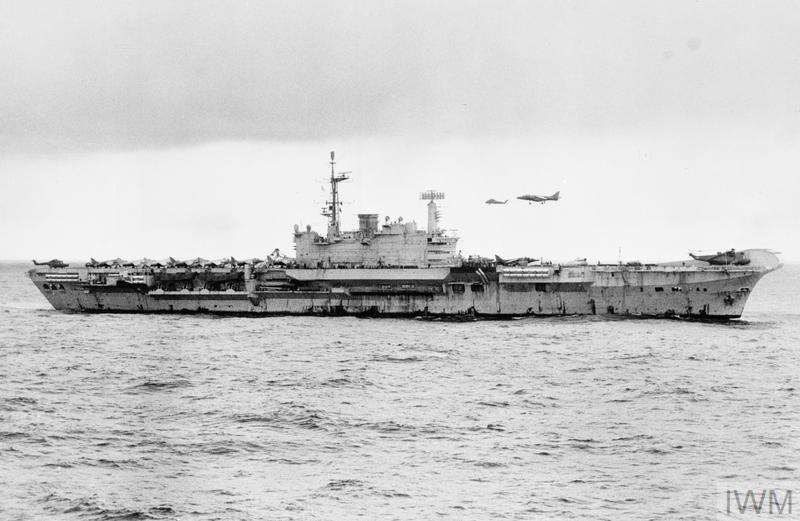