There were some significant developments on Saturday 5 June 1982 as the lifting fog allowed British forces to redouble their efforts in the campaign to retake the Falkland Islands.

From the aviators’ perspective the opening of a new forward operating base on June 5 meant the Sea Carrier Combat Air Patrols would be close at hand to take on Argentine attackers, reducing reaction time and increasing the jets’ endurance over the islands when compared to the long haul in from the carriers out at the edge of the Total Exclusion Zone, which had been the practice up until that point.

The new temporary airstrip, known in Naval circles as HMS Sheathbill, was built by Royal Engineers at Port San Carlos, close to Ajax Bay and San Carlos Water, where the bulk of the activity was being carried out in preparation for the final assault on Stanley.

In connection with that final assault, as further supplies arrived by convoy, soldiers of 2nd Scots Guards embarked in assault ship HMS Intrepid in San Carlos Water on June 5 for a night-time passage round Lafonia to Lively Island, which lies at the mouth of Choiseul Sound, then on to the Bluff Cove forward operating base by using the ship’s four Landing Craft Utility.

The big assault ship could not be risked too far inshore – but it meant a long, wet and uncomfortable transfer ashore for the Guardsmen early on June 6 as the weather, and the seas, took a turn for the worse.

The establishment of HMS Sheathbill came at an opportune moment, allowing task group flagship HMS Hermes to undertake essential maintenance while still operating as a floating airfield out to sea. A Sea Harrier and two RAF Harrier GR3s from the veteran carrier were the first aircraft to land at the new airstrip.

Clearer weather also allowed greater activity amongst the helicopter community ashore and afloat, increasing the speed with which supplies were moved around East Falkland.

The warships assembled in San Carlos Water continued to carry out a range of vital offensive and defensive tasks on June 5.

Type 21 frigate HMS Avenger bombarded Fox Bay and Port Howard on West Falkland that evening, and Rothesay-class frigate HMS Plymouth was designated close escort for HMS Intrepid as she made her way south and east to Lively Island.

Type 21 frigate HMS Arrow and Type 42 destroyer HMS Exeter were on watch at the northern and southern entrances respectively to Falkland Sound, and as winds increased to near gale-force over the latter part of the day Type 42 destroyer HMS Cardiff and Type 12 frigate HMS Yarmouth sailed from the carrier battle group to San Carlos Water, from where they would continue on round the coast to bombard Stanley.

Today’s image from the Imperial War Museum collection (© IWM FKD 424) shows a Sea Harrier operating from HMS Sheathbill, a temporary airstrip built at Port San Carlos by Royal Engineers as a forward operating base. Sheathbill was ready for business on 5 June 1982. 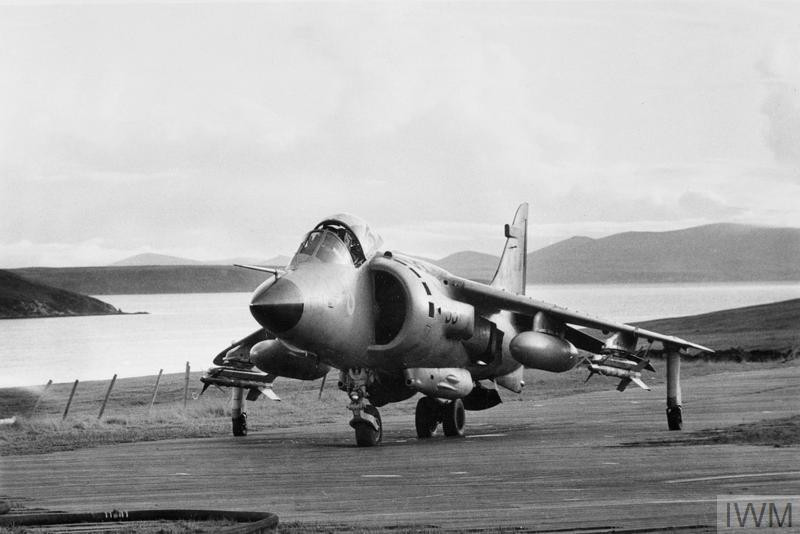