On the 38th anniversary of the greatest amphibious invasion the world had ever seen, a smaller-scale version was being undertaken in the South Atlantic.

Although the colossal and intricate nature of D-Day and the Normandy Landings will likely never again be matched, the distance – nearly 8,000 miles – and inhospitable nature of the South Atlantic in winter meant that the retaking of the Falkland Islands was in its own way a difficult and dangerous undertaking for British forces.

And although Sunday 6 June 1982 saw the gradual build-up of assault forces close to Stanley continue, British commanders by land and sea were prepared for further challenges in their bid to subdue Argentine forces in the islands’ capital.

With the fog and low cloud again enveloping the area, air operations were curtailed, which meant not much in the way of Combat Air Patrols by Sea Harriers, not attacks from Argentine bombers, which allowed the movement of British troops by land and sea to continue.

The most significant such movement was that of the Welsh Guards to Bluff Cove in assault ship HMS Fearless on the evening of 6 June, a move mirroring the ferrying of their Scottish counterparts a day earlier earlier.

On this occasion, though, when the ship reached Lively Island, she was to have been met by the Landing Craft Utility (LCUs) of HMS Intrepid, which would take the Welsh Guards on to Bluff Cove, but the smaller vessels were not available.

As the majority of Fearless’s own LCUs were round on the north coast of East Falkland, operating in Teal Inlet, the best that could be done was to put ashore the HQ and 2 Coy of the Welsh Guards in her last two LCUs, then return to San Carlos Water with the remaining men to try again on the following evening.

6 June brought another ‘blue-on-blue’ incident which resulted in the deaths of four members of the Army.

A Gazelle helicopter of 656 Squadron Army Air Corps, the dedicated air wing for 5th Infantry Brigade, was flying from Darwin towards Mount Pleasant Peak, to the west of Bluff Cove.

On board were a flight crew of two and two signals specialists who were on their way to attend to defective equipment on a relay station on the mountain, but a lack of co-ordination between elements of the British forces meant the aircraft movement had not been flagged up, and the aircraft’s IFF (Identification Friend or Foe) transmitter had probably been switched off as it interfered with some British air defence systems.

The Gazelle was flying within designated Brigade airspace, but was on a route used by enemy aircraft in the past, and Type 42 destroyer HMS Cardiff, carrying out naval gunfire support to the east as well as air defence duties, was not aware of either the helicopter’s mission, nor the presence of a radio relay station on Mount Pleasant Peak.

The helicopter was spotted by Cardiff, which because of its speed and course (in the direction of Stanley airfield) believed it to be an Argentine C-130 Hercules flying in to resupply the garrison at the islands’ capital; the ship fired her Sea Darts, and one of them destroyed the Gazelle, killing all four men on board.

Replenishment ship RFA Fort Austin, which had been the first ship to sail past Ascension Island on the passage south to South Georgia and the Falklands, passed her stores on to other auxiliaries and turned north for the long journey home

Also heading home were more than 50 patients who had been ferried from the Falklands to Montevideo in Uruguay by hospital ship HMS Hydra.

Hydra, a Hecla-class ocean survey vessel, had picked up the first of her passengers from requisitioned troopships SS Canberra and MV Norland, then rendezvoused with hospital ship HMHS Uganda in the Red Cross box off the Falklands before heading north to the mouth of the River Plate.

En route she carried out her first ever replenishment at sea (by tanker RFA Olmeda), despite the fact she was in her 16th year of service.

Hydra arrived at Montevideo on 6 June, and her patients were disembarked and flown home to the UK aboard VC-10 airliners, while the ship sailed south once more late the same evening.

Today’s image from the Imperial War Museum collection (© IWM MH 27582) shows HMS Intrepid, one of the two assault ships which ferried Scots and Welsh Guards from San Carlos Water to the Port Pleasant area in the first week of  June 1982. 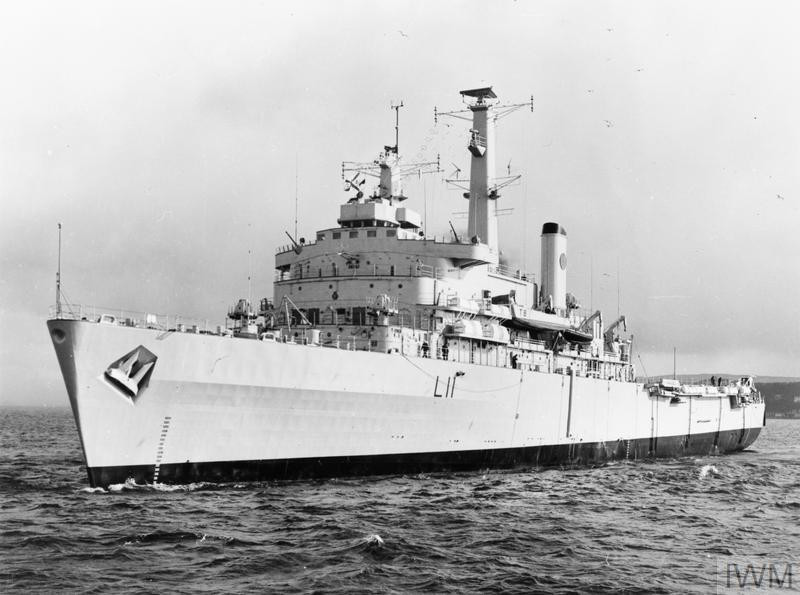