The British task force in the South Atlantic on Operation Corporate – the campaign to retake the Falkland Islands from Argentina – was hit by two more deaths on Thursday 6 May 1982.

Two Sea Harriers from 801 Naval Air Squadron, operating from HMS Invincible, set out on a Combat Air Patrol (CAP) mission in the early hours of the morning, taking off into bad weather – heavy rain combined with low cloud and fog to make conditions extremely challenging.

Pilots Lt Cdr John Eyton-Jones and Lt Alan Curtis were sent to take a look at a low-level, fast-moving radar contact that had been picked up in the vicinity of the still-smouldering hulk of HMS Sheffield, which had been all but destroyed in a deadly Exocet missile attack two days earlier.

Neither aircraft returned to the carrier, and it was assumed that, in the dreadful weather conditions, the Sea Harriers collided mid-air, killing both pilots.

Both men were described by colleagues as gifted fighter pilots, and Lt Curtis had been responsible for shooting down an Argentine Canberra jet on 1 May.

The incident reduced the number of Sea Harriers available to task group commanders to 17, having started off with 20, but reinforcements were on the way.

On Ascension Island, eight Sea Harriers were flown from Wideawake Airfield on to the flight deck of SS Atlantic Conveyor in Georgetown Harbour, and were followed shortly after by six of the nine RAF Harrier GR3s that had arrived on Ascension over the past few days.

The remaining three Harrier GR3s stayed at Wideawake to protect the vital logistics hub from any Argentine threat; one GR3 later developed a serious fault and returned to the UK.

Tidepool carried two Wessex 5s from E Flight 845 NAS with her, and undertook a three-and-a-half hour RAS with SS Canberra on the day, transferring 740 tons of furnace fuel oil and 100 tons of fresh water. 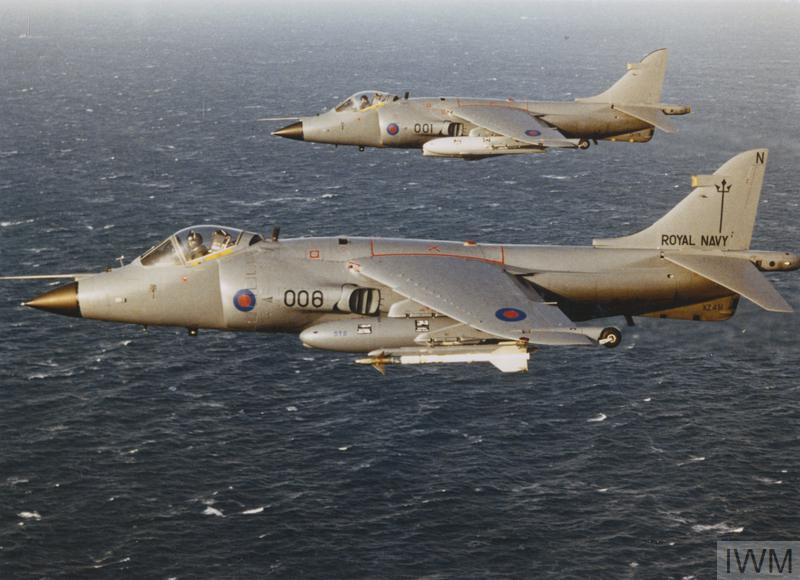