Diplomatic efforts to end the increasingly hostile situation in the South Atlantic continued to limp along on Friday 7 May 1982 as the United Nations put a six-point peace plan to the governments of the UK and Argentina which initially raised hopes of some sort of settlement but which failed to halt military clashes on and around the Falkland Islands.

On the same day, the UK announced an extension of the Total Exclusion Zone (TEZ), originally covering an area within a radius of 200 miles around the islands, the new zone would stretch to within 23 miles of the Argentine coast.

Sailors – and particularly commanders –­ in the main British Carrier Battle Group, positioned towards the eastern limit of the TEZ following the air attack on destroyer HMS Sheffield on 4 May, were showing signs of frustration as another foggy, damp day dawned in the South Atlantic.

And the sense of Groundhog Day was nearly reinforced when two Sea Harriers, launched into a gap in the fog to investigate a radar contact, almost didn’t make it back to HMS Invincible; as their patrol ended the carrier was shrouded in fog, and it was only a fortunate break in the clouds that allowed the two jets, running low on fuel, to be recovered before the gloom descended once more.

For a day with very little enemy action it proved a busy one for the group as they followed up submarine and air contacts, checked on the condition of the hulk of HMS Sheffield – which was still burning but steadfastly remaining upright and afloat – and waited with increasing impatience for news of the next phase of Operation  Corporate, which would involve amphibious landings.

Frigate HMS Yarmouth escorted a small group of RFAs in to join the Battle Group, while to the north a high tempo was being maintained at Ascension Island.

The path of the Amphibious Group was monitored by long-range RAF Nimrod patrols, covering almost 3,000 miles towards South Georgia.

SS Atlantic Conveyor was part of the Amphibious Group for the passage south; the precious Harriers she carried with her were placed in huge rubberised bags which did a good job of protecting the aircraft  from the harsh South Atlantic autumn conditions.

Most of the Harrier pilots would embark in MV Norland to continue their journey to the TEZ.

Two frigates also struck out for the Falklands from Ascension on 7 May – Type 21 frigate HMS Ardent and Leander-class frigate HMS Argonaut, which joined with the Amphibious Group more than a week later, and the Carrier Battle Group two days after that, on 18 May.

Heading north from Ascension bound for Portland in the UK was tanker RFA Brambleleaf, while another of the task force tankers, RFA Tidespring, carried out a replenishment at sea (RAS) with hospital ship HMHS Uganda.

Today’s image from the Imperial War Museum collection (© IWM FKD 161) shows Cunard container ship Atlantic Conveyor, converted for use as an air transport vessel, being refuelled by RFA Tidepool during her journey south toward the Falkland Islands. A Sea Harrier of 809 Naval Air Squadron is being moved aft on the deck of Atlantic Conveyor 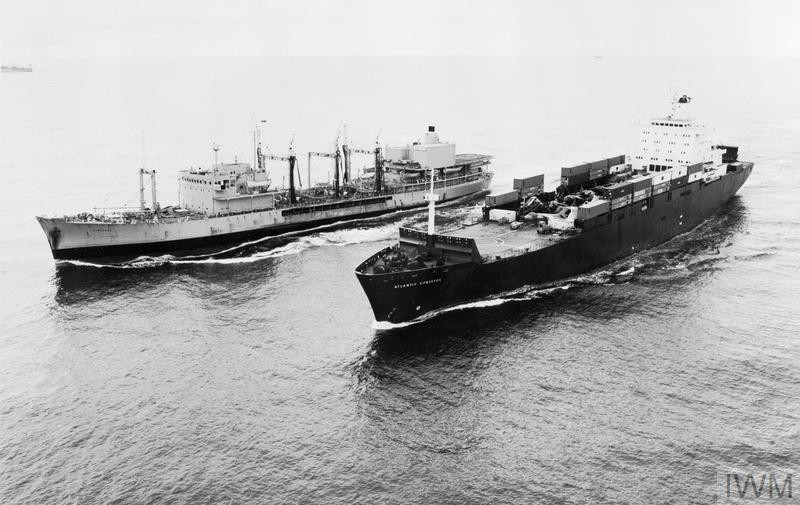