8 May: Back on the offensive

Saturday 8 May 1982 saw the British task group in the South Atlantic go back on the offensive after the shock of the deadly attack on HMS Sheffield and the reflective period forced on the men in their various warships and auxiliaries by a spell of poor weather.

The new extended Total Exclusion Zone came into force today, although there had been little activity by the main Argentine naval forces since the sinking of the cruiser ARA General Belgrano, which had demonstrated to the South Americans the dangers that lurked in the South Atlantic in the form of Royal Navy nuclear-powered attack submarines.

Lying well to the east of the Falkland Islands, the British task force went back on the offensive with instructions to the commanders of two frigates to go and make a nuisance of themselves.

Type 22 HMS Brilliant was sent to the northern end of Falkland Sound, between the two  main islands, with the instruction to sink anything that moved or looked like it might move, in the area – the ship was particularly on the look-out for Argentine supply vessels.

Type 21 frigate HMS Alacrity went off to Stanley to bombard shore facilities, not only damaging the physical status and mental equilibrium of Argentine forces there but also denying them a decent night’s sleep.

Meanwhile the Landing Ships Logistic group continued to make headway to the Falklands, arriving in the TEZ, as did weapons and munitions ship RFA Regent, which was destined to spend some time further east in South Georgia.

Finally, one of the smallest ships to take part in the operation, ocean-going RMAS Typhoon, arrived at King Edward Point, South Georgia, to help with salvage work, including that carried out on Argentine submarine ARA Santa Fe, which had been damaged in the battle to retake South Georgia the previous month.

Today’s image from the Imperial War Museum collection (© IWM FKD 137) shows RFA Regent, a large Replenishment Ship (also known as an AEF (Ammunition, Explosives, Food Stores Ship) while she was at anchor off South Georgia. Regent called at the island to replenish her stores before sailing to Port Stanley at the end of the Conflict. 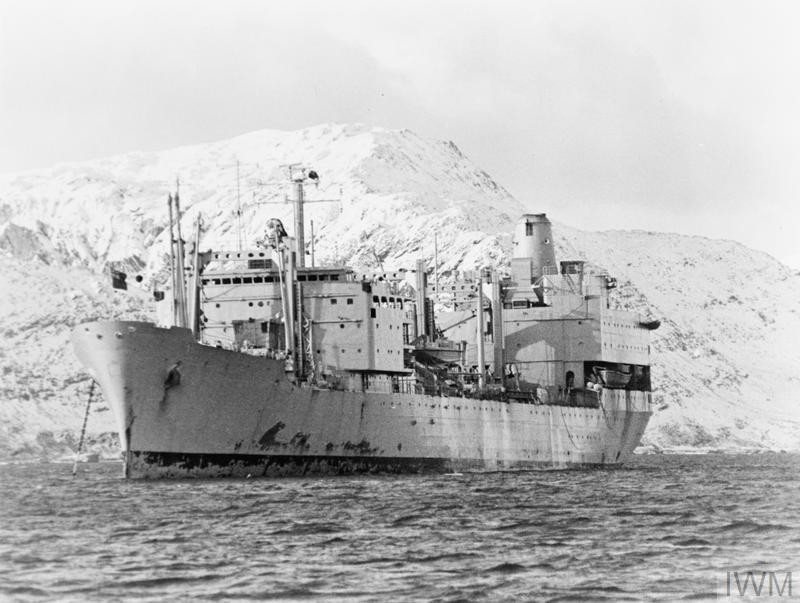