Argentine forces lost another ship and more aircraft on Sunday 9 May 1982, while the slow death of Royal Navy destroyer HMS Sheffield continued to play out a long way off the coast of the Falkland Islands.

The ship lost by Argentina was the 1,400-ton fishing trawler Narwal, which had been fitted out with specialist equipment to undertake the task of electronic signals intelligence gathering.

Narwal had first been noticed by British patrol aircraft at the end of April, but she became a target around midday on 9 May partly because of poor weather over East Falkland.

Two Sea Harriers of 800 Naval Air Squadron, flying from British flagship HMS Hermes, had had to abort a bombing mission to Stanley because low cloud – the aircraft were due to bomb from high altitude.

On their way back to the aircraft carrier they spotted a boat some 50 miles off Stanley, and identified her as Narwal, which had been warned off by frigate HMS Alacrity just as the Carrier Battle Group had first entered the 200-mile Total Exclusion Zone (TEZ) some days before.

Suspected of gathering intelligence on the British carrier group – in particular their precise location – Narwal had to be silenced.

Given permission, the two Sea Harriers attacked the trawler; one dropped a 1,000lb bomb which, because of its high-altitude fuse, failed to detonate but killed one Argentine sailor and smashed a hole in the deck.

The other aircraft strafed it with 30mm cannon fire, which helped bring Narwal to a halt.

Later that afternoon a British special forces team was flown in helicopter to take over the trawler, and their discovery of documents, and an Argentine Navy officer, on board confirmed that Narwal was not an innocent fishing trawler.

But the damage done by the Harriers was taking its toll, and the SF team, along with the trawler’s crew, were taken off by helicopter as Narwal slowly sank into the South Atlantic.

The number of aircraft lost by Argentina on 9 May was something of a moot point 40 years ago.

Around 1400 on the afternoon of 9 May air control ship HMS Coventry, a Type 42 destroyer, had picked up a small group of aircraft at the edge of missile range and had launched three Sea Dart surface-to-air missiles at them.

It was believed that the aircraft – a C-130 Hercules carrying supplies for Argentine forces in the Falklands, accompanied by two or three smaller warplanes – had spotted the incoming missiles from 160 miles or more distance, and had turned away, out of range.

While it was of some concern to British commanders that all the missiles had missed, it was (much)  later discovered that two of the aircraft, A-4C Skyhawks, never returned to base that afternoon; it is possible they had indeed been hit by Coventry’s Sea Darts, although crashing into high ground in poor visibility is just as plausible a reason.

What is certain is that later the same day an Argentine Puma helicopter, presumed to be on its way to search for the lost trawler Narwal, was hit by another Sea Dart from HMS Coventry over Choiseul Sound, east of Goose Green, killing all three of its aircrew.

Far out to the east of the Falkland Islands, Type 12 frigate HMS Yarmouth was attempting to tow the badly-damaged destroyer HMS Sheffield to South Georgia, although sea conditions at the edge of the TEZ on 9 May were far from ideal; as it turned out the Shiny Sheff was nearing her end.

Over in South Georgia, small Fleet tanker RFA Blue Rover arrived in Cumberland Bay, ready to take up the role of station tanker.

At around this time Landing Ship Logistic RFA Sir Bedivere sailed from Ascension Island, carrying with her a party of Royal Engineers. 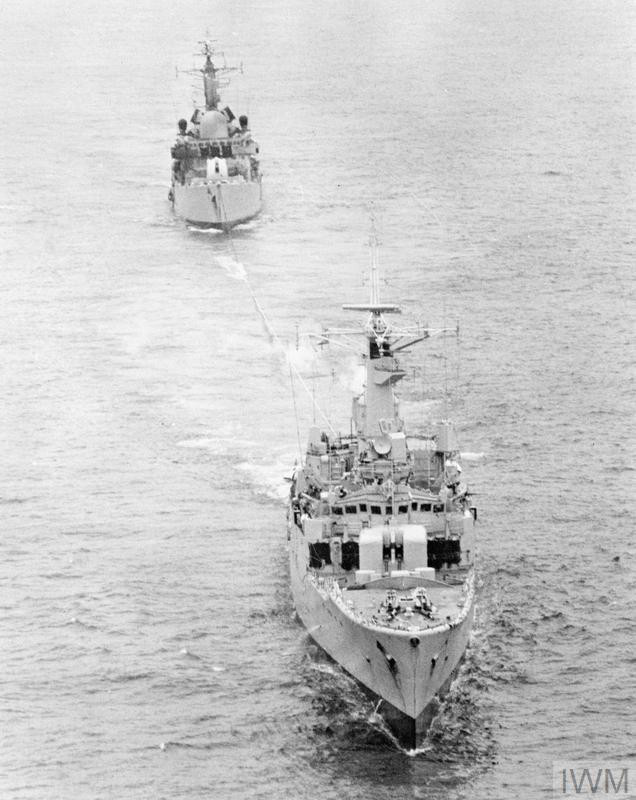