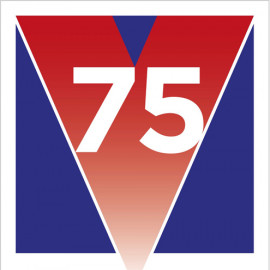 Below are notes from the Commemorative Events team in the RBL explaining their thoughts for the commemoration of VE-75 during our current lockdown.  It would appear that the Govt.are about to announce a Two Minute Silence for 1100 on 8 May.

As requested,  can I encourage our membership to openly participate in the remembrance moment; be that by standing proudly in your garden, at your front door or at a window during the Two Minute Silence.  I very much hope that Shipmates will join others by marking this important moment in whichever way they deem appropriate.

The advent of the Covid-19 crisis has forced the cancellation of a number of those events with VE75 perhaps being the most notable.  RBL staff have recently been busy following up on an initial email to all of the 1100+ affected veterans with an individual phone call.  Some of those veterans hoping to participate alongside their contemporaries now live quite solitary lives and I believe that it is important that we do our best to help each of them to manage their disappointment as best as we can.

The RBL is now working hard in collaboration with others to develop plans to appropriately mark this significant WW2 anniversary within the challenging constraints of social distancing.  In the virtual space, in addition to the appropriate messaging which many organisations will be developing, the RBL will be hosting a broadcast on online channels featuring veteran testimony and VE related activities.  We will all recognise however, that the majority of VE Veterans will be most effectively reached via TV & radio and you will be pleased to hear that a comprehensive programme of activities, led by DCMS, is being developed that has the WW2 generation as its focus.  The BBC is leading the way with two hour long broadcasts, at 1500hrs and 2000hrs, recalling the events of VE day and giving an insight into the lives and experience of the WW2 generation then and today.

In addition, DCMS has now recognised the need for a formal moment earlier in the day in recognition of those that did not come home before the more celebratory elements of this important anniversary get underway; the BBC will also televise these proceedings.  Additionally, we are suggesting that it is right that the country also acknowledges the service and sacrifice of the civilian services that then, as now, played a huge role in keeping the country safe.  I therefore write in collaboration with others within the Service Charity sector to ask for your support in encouraging your membership to openly participate in the remembrance moment; be that by standing proudly in their garden, at their front door or at a window during the Two Minute Silence.   We also hope that this simple act will show the members of that generation and those with more contemporary roles that live within all of our communities that we honour and respect them even during this time of national crisis.

At 11:00 on Friday 8 May we very much hope that your members will join others by marking this important moment in whichever way they deem appropriate. In this significant anniversary year, and at this very unsettled time, it would be a poignant symbol of hope and solidarity to all members of our community to see us visibly acknowledging the contribution of a generation to whom we owe so much and will act as a timely reminder to those of our comrades who may need our collective support that they are not alone.