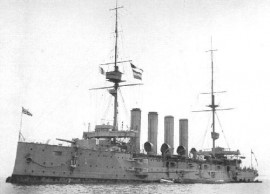 Seven European naval associations have urged Dutch vessels to halt a salvage operation on three sunken British warships because they are disturbing the ocean graves of 1,500 sailors (Deborah Haynes writes). The Presidents of the Associations of European Naval Veterans wrote in a letter to The Times that no such desecration would occur on land. "We urge that our sailors should [)e allowed to rest in peace," the former commanders wrote. The letter, representing organisations from the Netherlands, Germany, France, Italy, Belgium, Austria and Britain, came after an article in The Times disclosing how looters seeking scrap metal were plundering the vessels, which sank off the Dutch coast at the start oflhe First World War. The soaring price of copper and bronze has made such salvage profitable but the letter calls for the site to be protected, Jann Witt, ofthe German Naval Association, said: "I think it is a shame that these wrecks, recognised war graves, are salvaged for economic purposes, for mere greed.

Also in the "Times"

It is not acceptable that the war graves from the ships Aboukir, Hogue and Cressy are being plundered for scrap metal.

Sir, Further to your report (Sept 27) that the maritime war graves of some 1,500 sailors lost from the ships Aboukir, Hogue and Cressy in 1914 are being plundered for scrap metal, we, the presidents of associations of European naval veterans forming the International Maritime Confederation, suggest that no such desecration would take place in graves on land.
We urge that our sailors should be allowed to rest in peace.