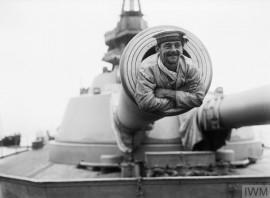 Anniversary of the opening shots of the Gallipoli Campaign

19 February 1915 saw the opening shots of the Gallipoli campaign, an attempt by the Entente alliance – chiefly Britain (and her Empire) and France –  to attack the ‘soft underbelly’ of the Central Powers and gain some initiative as the Western Front became mired in trench warfare.

The Ottoman Empire had joined the Great War with a surprise attack on Russian Black Sea ports in October 1914, cutting off the last reliable supply route between the Western European combatants and their ally in the East – the Germans and Austria-Hungary had cut off overland links and the Baltic Sea while the northern sea route was frozen in winter and was a considerable distance from the Eastern Front.

By capturing the Dardanelles – the narrow channel between the Aegean Sea and the Sea of Marmara – the British and French planned to force a route on through the Bosphorus (attacking Constantinople, the Ottoman capital, in the process) and into the otherwise landlocked Black Sea.

This, the reasoning went, would take the largest city of the Ottoman Empire – now the Turkish city  of Istanbul – out of the equation, the Ottomans would crumple, drop out of the fighting and allow Entente supplies to flow in and out of the warm water ports of Russia.

It could also persuade wavering Balkan states such as Bulgaria and Greece to throw their lot in with the Entente powers, and would also secure British interests in the Middle East – including oilfields.

In a state of over-confidence (the Ottoman Empire was regarded as the sick man of Europe, and Ottoman troops largely dismissed as a fighting force) the Aegean-based Allied fleet was given the task of forcing the Dardanelles.

On 17 February 1915 a reconnaissance aircraft from HMS Ark Royal flew a mission over the Dardanelles, a strait which stretches south-west to north-east for almost 40 miles and is never wider than four miles and pinches in to less than a mile in places.

Two days later a combined Naval force of French and Royal Navy ships, including dreadnought HMS Queen Elizabeth, opened fire from distance on the Ottoman forts at the southern end of the Dardanelles.

In less than a week the forts had been silenced and mines cleared from the mouth of the waterway, and the Fleet prepared to turn their guns on forts further north, but progress was too slow for First Lord of the Admiralty Winston Churchill.

Under pressure, the experienced Admiral Sackville Carden, who headed the Royal Navy force, hastily redrew his plans, and then sent a message to Churchill predicting the Fleet would be off Constantinople in a fortnight.

As it happened, at the end of those two weeks Carden had fallen seriously ill and been replaced as Naval commander – and the combined fleet never quite made it through the Dardanelles, as we shall see in the coming weeks…

Our image, from the Imperial War Museum collection (© IWM Q 13240), shows a British sailor in one of the 15-inch guns of dreadnought HMS Queen Elizabeth, shortly before the Gallipoli campaign got under way in February 1915.