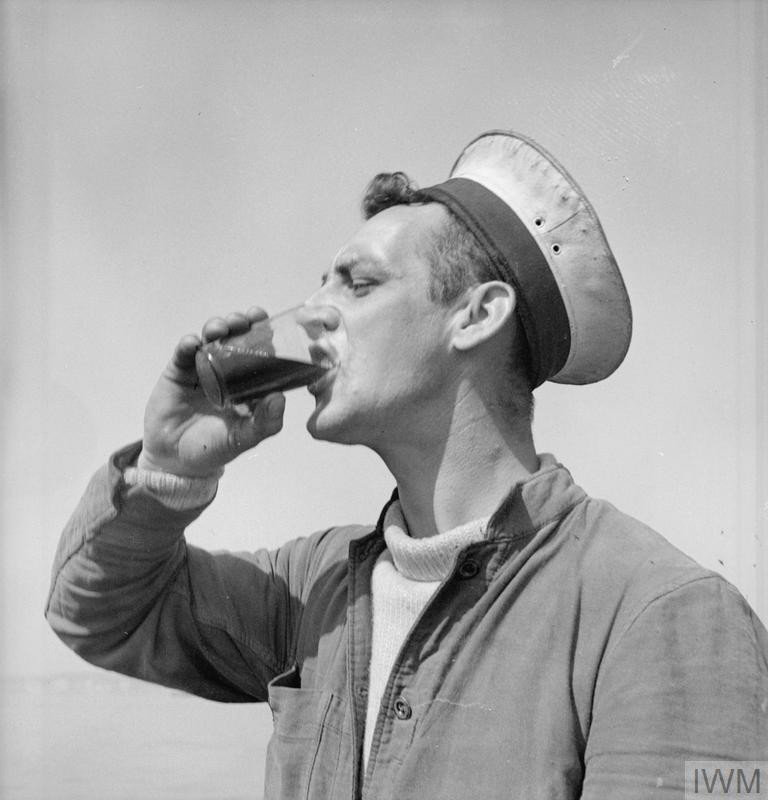 Whatever the weather, high summer always brings a day of sombre reflection for some more senior members of the Royal Navy community.

It was on this day in 1970 that the centuries-old tradition of issuing alcohol to the sailors of British warships came to the end with the final tots of rum being handed out that morning in ships and establishments around the world.

The Admiralty had made the decision some months earlier, largely as a result of the rapidly-evolving role of modern sailors.

It recognised the fact that the warship of the 1970s and beyond was likely to feature more and more technically-advanced equipment and systems – not the sort of kit to be using after a generous helping of Naval rum.

The formal issuing of alcohol dated back to at least the 17th century, when beer – or frequently ‘small beer’, a much weaker (less than one per cent) version – was dished out as it kept better than fresh water.

With a ration of anything up to a gallon per man per day, storing such quantities on board a ship proved tricky, so in the mid 1650s spirits were substituted at a rate of half a pint per man per day.

At first brandy was the spirit of choice of the Admiralty, but as the French were regularly on the opposite side of the argument to the Royal Navy, when Caribbean territories came under the Crown, there was a wholesale switch to rum – a state of affairs that lasted until Black Tot Day, although the quantity reduced over time.

With incidences of drunkenness on the rise, the rum issue was formalised in 1740; rum was diluted with water (mixed, where possible, with sugar and lime juice), and these tots were issued twice per day.

The man behind this move, Admiral Edward Vernon, was known as Old Grog because of the grogram cloth of his favourite coat, and so his watered-down rum issue became known as grog (and hence the later term ‘groggy’, meaning befuddled or confused, possibly as a result of the overconsumption of alcohol, watered down or not…)

The rum issue almost disappeared in Victorian times, but instead was reduced to an eighth of a pint and issued just once a day in the morning, and it was removed from officers and warrant officers in 1881 and at the end of World War 1 respectively.

But post-World War 2, the need for clear heads while handling complicated machinery, weaponry and aircraft meant some branches were already introducing their own local controls of the tot – for aircrews there was a rule of thumb which allowed four hours ‘between bottle and throttle’, and the timing of the tot issue was also changed to allow for work patterns.

The final removal of the tot was the subject of a debate in the House of Commons, and they concurred with the Admiralty.

Arrangements for the ending of the daily tot for ratings were made under First Sea Lord Admiral of the Fleet Michael Le Fanu, as a result affectionately known as ‘Dry Ginger’, who marked the day itself with a personal signal:

To jerk a tear from the eye

But I say to you lot

Very sad about the tot

But thank you, good luck and goodbye.

Those lines have added poignancy with hindsight – the admiral had at that point been diagnosed with a terminal illness and would not survive the year, though that was not common knowledge around the Fleet.

The days itself was marked with appropriate solemnity – some wore black armbands as they received their final tot, there were even funeral services held.

The last vestiges of the traditional tot continued in the form of splicing the mainbrace – a signal from the monarch for a Fleet-wide tot issue to mark a special occasion.

Splicing the mainbrace on a sailing ship was one of the most difficult, critical and arduous tasks as the mainbrace was a crucial piece of rigging, controlling the mainsail, and the successful completion of such a task, often carried out as an emergency and in battle, was duly rewarded with an extra ration of rum.

Pictured, in this image from the Imperial War Museum collection (© IWM A 23532), is Gunlayer Cutts, of Mansfield, drinking his tot of rum on board minesweeper HM/MS 88, off Anzio in Italy in May 1944