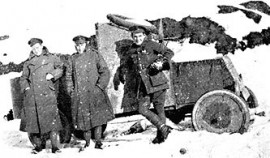 The UVF sailors honoured by the Tzar.

111 Royal Navy personnel from Northern Ireland were involved in what is perhaps the most bizarre linking of Irish politics with the international relations of the First World War.

Men from the UVF (Ulster Volunteer Force)armed with Canadian rifles which were most likely smuggled in avoiding the Royal Navy,served in the Russian empire in what has been dubbed “The Czar’s British Squadron” - an armoured car squadron of the Royal Naval Service. Three of the armoured cars in the squadron were christened ‘Ulster’, ‘Londonderry’ and ‘Mountjoy’.

Read more from the pdf file on the left