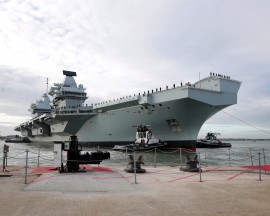 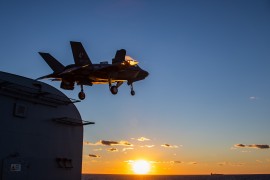 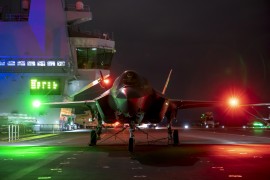 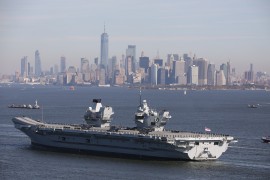 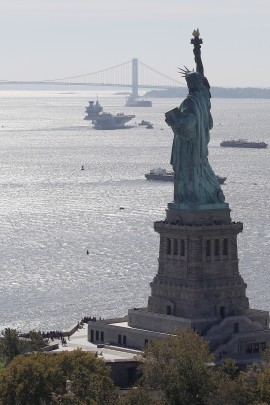 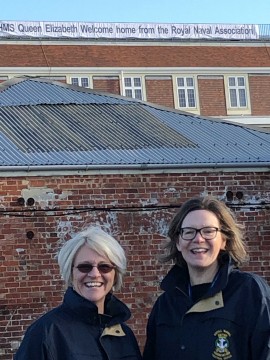 The Royal Navy’s newest aircraft carrier has returned home to Portsmouth after a successful programme of fast-jet trials on the far side of the Atlantic.

F-35 Lightning fighters flew on and off HMS Queen Elizabeth in eight weeks of intensive trials, setting the parameters for future operations and helping sailors on board the 65,000-tonne warship turn training into reality.

HMS Queen Elizabeth, along with her Westlant 18 escort, frigate HMS Monmouth, had by that stage visited Mayport in Florida and Norfolk, Virginia, avoiding the worst of Hurricane Florence on the way north.

On Tuesday September 25 came the moment everyone has been waiting for – Cdr Nathan Gray RN and Sqn Ldr Andy Edgell RAF landed their Lightnings on the 4.5-acre flight deck of the British carrier with Cdr Gray becoming the first pilot to take off using the ship’s ski ramp.

It was a particularly satisfying day for Commanding Officer Capt Jerry Kyd, who said: “I am quite emotional to be here in HMS Queen Elizabeth seeing the return of fixed-wing aviation, having been the captain of the aircraft carrier [HMS Ark Royal] which launched the last Harrier at sea nearly eight years ago.”

A week or so later another milestone was passed when the F-35s made their first night-time landings, with and without night-vision technology, watched by Commander Air (“Wings”) Cdr James Blackmore – who coincidentally flew the last Harrier to leave Ark Royal in 2010.

And October also saw Queen Elizabeth host two heavyweight American military aircraft – the MV-22 Osprey, with its unique tilt-rotor system, and the giant 33-tonne MH-53E Sea Dragon helicopter, which is more than twice the weight of a fully-loaded Merlin.

Aircraft approach the ship from astern at speed before touching down gently and rolling to a halt, using thrust from the jet nozzle as well as lift over the wings to bring the fighter down safely.

Such a move allows aircraft to land with greater loads – which means they will not have to jettison expensive weapons and fuel before touching down.

Wizzer has spent 17 years developing the technique, and flown more than 2,000 such landings on simulators before being given the honour of carrying out the first live SRVL landing, which went exactly as planned.

Further testing and data-gathering in October saw shipborne F-35 Lightnings drop their first bombs – these were inert, concrete-filled American-made Paveway II laser-guided devices which were fully-functioning but contained no explosives. More than 50 were dropped during the programme.

Such trials allow the ‘rules’ to be made for future operations when real ordnance is loaded onto and carried by the Lightning jets.

The reward for all the hard work by the ship’s company was HMS Queen Elizabeth’s next port visit – a week in New York.

The carrier dropped anchor in Upper Bay, within sight of the Statue of Liberty and Lower Manhattan, allowing the ship to host a number of high-profile national and international events, and for the British sailors to explore the Big Apple.

Defence Secretary Gavin Williamson was there to greet the warship, saying: “"HMS Queen Elizabeth is not just a warship, but a symbol of our enduring commitment to our security, and the security of our allies too,” he said.

“This state-of-the-art ship is built on more than 470 years of proud Royal Navy history and her entry into New York Harbour shows that our armed forces are ready to stand by our allies for generations to come."

The visit to New York also saw a change of command, with Capt Nick Cooke-Priest taking over from Capt Jerry Kyd.

On leaving New York another ‘first’ was posted when Sqn Ldr Edgell landed a Lightning the ‘wrong way’ – approaching over the bows and facing aft as he brought the jet into a hover and gently onto the flight deck.

After more than two months of intensive fast-jet trials the two American F-35 aircraft left HMS Queen Elizabeth and returned to their Maryland base, having been put through 202 short take-offs, 187 vertical landings and 15 SRVL rolling landings.

And with that Westlant 18 was brought to an end; other units involved (including tanker RFA Tidespring, aircraft from 814, 820 and 845 Naval Air Squadrons and Royal Marines from 42 Cdo) headed back to their various homes and the carrier sailed into Portsmouth under gunmetal grey skies, pivoting in the harbour before being nudged alongside the Princess Royal Jetty.

The carrier will remain in Portsmouth for the first part of 2019 as she undergoes maintenance.