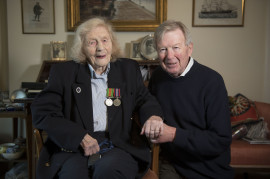 Ailsa and her son Patrick 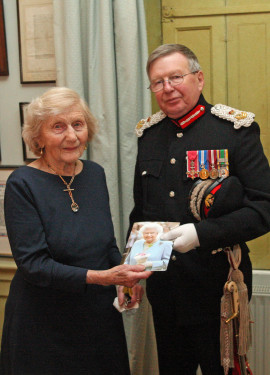 Ailsa on her 100th Birthday

Centenarian Wren stays online thanks to The Royal Naval Association

You would have to be pretty devoted to your friends if you were prepared to travel more than four hours each way by bus to meet up with them on a regular basis.

Especially if you were over 100…

Ailsa Stewart definitely falls into that category – but she has finally decided to take it a little easier, thanks to the Royal Naval Association’s (RNA’s) Project Semaphore and a little help from SSAFA.

Ailsa (105) has lived in Campbeltown since 1943, though she was born in India in 1914 while her father was serving in the Cheshire Regiment.

She came back to the UK at the age of 16, and when it came to military service she bucked the trend of her siblings (she had four brothers and two sisters) by being the only one to opt for life in a blue suit.

Living in Kew at the time, her first taste of life in the Women’s Royal Naval Service – the Wrens – came at Greenwich in East London, but her career then took her north of the border.

Ailsa initially trained in meteorology, and spent time at HMS Jackdaw in Crail, Fife, and HMS Condor in Arbroath, before switching to an altogether different career path.

She became a specialist in torpedo assessment, calculating the optimum angles at which Fleet Air Arm aircraft should drop their tinfish for maximum effect – and that took her to the RN Air Station of Machrihanish at Campbeltown, where she worked with Fairey Albacore and Barracuda torpedo-bombers.

She was very much in demand for her skill, and for a period worked with the RAF in the training of their Beaufighter anti-shipping aircraft.

“It was very isolated, and she arrived in driving rain,” said her son Patrick, who retired earlier this year from the role of Lord Lieutenant of Argyll and Bute. “She thought it was at the end of the world…”

Ailsa soon met her future husband at Campbeltown – Ian Stewart was Procurator Fiscal for Campbeltown at the time, and the couple were introduced by Selwyn Taylor, a friend of Ian’s who was working as a doctor at HMS Landrail/RNAS Machrihanish.

Ian and Ailsa were married on Trafalgar Day 1944, and Patrick arrived on the scene nine months and four days later.

That spelled the end of Ailsa’s career in the WRNS – by that time she had attained the rank of Second Officer – and instead she threw herself into life as a homemaker and a leading light in the community, though she never lost her love for and interest in the Wrens.

That led to regular meetings with former comrades in Glasgow over many decades, and well into her hundreds Ailsa would be up at 5am to catch the bus, travelling north for more than four hours and making the return journey around 6pm – although Patrick would drive her when she could be persuaded.

“She is a very determined woman,” said Patrick, who commanded the local Sea Cadet unit for many years and is a Life Vice President of the Marine Society and Sea Cadets. “When she couldn’t make the journey she used an old laptop to meet online instead.”

That laptop has given up the ghost – which is where Project Semaphore came in.

The RNA scheme was designed to banish digital isolation amongst the Naval veteran community by giving them iPads to link them to the internet. Studies have shown that there are considerable health benefits to having access to social media and messaging, thereby staying in touch with friends, families – and former colleagues.

“She intends to use it to keep in touch with her group – she really enjoys her Wrens meetings,” said Patrick.

With training from her family and ongoing support from the Project Semaphore team, she aims to use the device to attend virtual meetings with other members of her Wren group, all of whom are veterans of World War 2 and who are also in line to benefit from Project Semaphore, which has loaned out hundreds of iPads to veterans around the country over the past three years.

The group’s application to the RNA for iPads was facilitated by Paul Ellis, Branch Committee Member for SSAFA in Glasgow, which also provided Ailsa with a hamper and commemorative coin over the Remembrance weekend.

“In light of a large number of events being curtailed if not cancelled, resulting in increased levels of social isolation within the veteran's community especially the remaining WW2 veterans, it is planned with the assistance of Project Semaphore to assist in empower the WW2 WRENs to re-establish connect with friends and regain some of their independence along with developing greater support networks,” said Paul.

The RNA are currently seeking funding to continue the work of Project Semaphore, enabling more veterans to get online, in a period of time where social isolation is even more of a welfare issue than ever before.