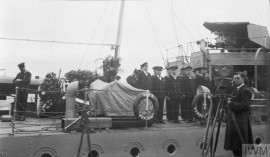 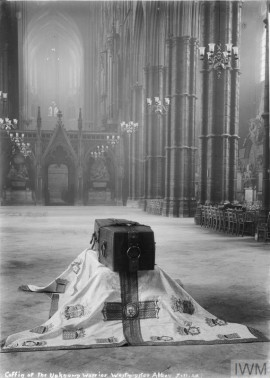 Centenary of the Unknown Warrior

One hundred years ago today the body of the Unknown Warrior was buried in Westminster Abbey with full State honours.

The ceremony was the result of a decision that ensured all who fell in the Great War would be treated equally, and that those who had no known grave would be remembered as readily as those who lay beneath a headstone.

Nearly a million servicemen and women from Britain and the Commonwealth lost their lives in the first war fought on a global and industrial scale.

It was decided early in the war that, to ensure equality of treatment in death, no bodies would be repatriated.

That meant hundreds of thousands of those who fell in battle would never receive a proper burial or a grave at which their family could grieve.

Indeed, many were left in unmarked graves on the battlefields where they lost their lives, perhaps a shellhole or bomb crater – and 165,000 combatants were simply never found.

The immense grief felt by the families who were never be able to bury their loved ones prompted Rev David Railton, an Army chaplain who had himself served on the Western Front, to write to the Dean of Westminster, Herbert Ryle, in 1920 with an idea for a single ‘Unknown Warrior’ to be brought home to be interred amongst royalty to represent the dead of the Empire and to act as the focus of national mourning.

The concept arose from an incident in 1916 when he saw a rough wooden cross erected on a makeshift grave, with the inscription (in pencil) ‘An Unknown British Soldier’.

With strong support, across the nation including Prime Minister David Lloyd George, the plan was put into action.

Four bodies (name, rank and regiment unknown) were exhumed from various European battlefields – believed to be Arras, Ypres, the Aisne and the Somme  – and brought to a chapel at Arras in France on 7 November 1920.

This choice of battlefields means that the Unknown Warrior could have been a member of the 63rd (Royal Naval) Division, sailors not required for sea service who fought under Army command at Arras, Paschendaele and the Somme, amongst other actions.

The chosen remains were placed in four plain coffins, draped with Union Flags, and a senior officer – eyes closed – rested his hand on one of them.

The other three bodies were taken to be reburied in France, while the chosen one was transported the next day to Boulogne, with troops lining the route.

After another overnight stay the coffin was placed in a casket of oak made from trees grown at Hampton Court Palace, banded in iron, with a medieval crusader’s sword – selected from the Royal Collection by King George V – affixed to the front, along with an iron shield bearing the description ‘A British Warrior who fell in the Great War 1914-1918 for King and Country’.

The casket was carried with all due ceremony to the harbour, where it was put aboard destroyer HMS Verdun.

The destroyer, escorted by six battleships, landed its precious cargo at Dover, which was then carried to London by train, remaining overnight at Victoria Station.

On the morning of 11 November the Unknown Warrior was taken on a horse-drawn gun carriage through massive, silent crowds to Whitehall, where the newly-built Cenotaph was formally unveiled, and then on to Westminster Abbey.

The body was placed in a tomb at the western end of the nave, watched by an honour guard of 100 Victoria Cross winners, as well as 100 nurses who had been wounded at the front.

Over the following days, millions of Britons filed past the grave to mark their respects before it was finally filled with soil brought back from the main battlefields.

Not only was the Unknown Warrior a representative for all those who died, but the concept also allowed thousands of grieving families to carry the thought that their loved one could be that chosen hero.

The hymns sung in the funeral service were recorded using experimental equipment by two sound engineers, one of them an officer in the newly-formed Royal Air Force ­– the first electrical recordings ever sold to the public anywhere in the world.

In this centenary year, members of the Military Wives Choirs from across the UK have come together to record a new version of one of the songs sung at the ceremony – Abide with Me.

The new recording of Abide with Me is available now via Spotify, iTunes and Amazon.

A short documentary with some original footage is available on the Westminster City Council website and on YouTube.

Our images, from the Imperial War Museum collection, show the casket containing the remains of the Unknown Warrior at on board destroyer HMS Verdun at Boulogne (© IWM Q 68248) and resting at Westminster Abbey the night before Armistice Day 1920 (© IWM Q 31514)