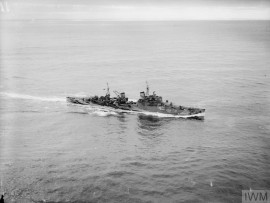 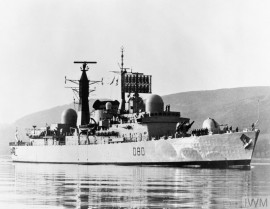 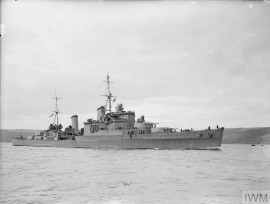 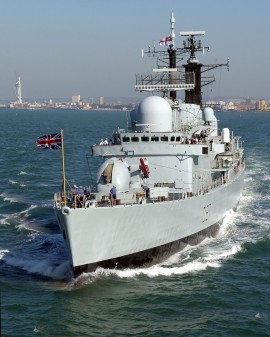 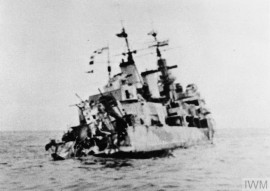 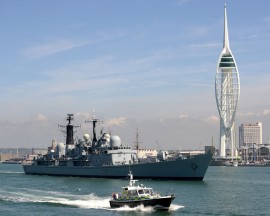 The names of three more future Royal Navy warships have been revealed in the past few days ­– and all three pick up civic links that were only severed in the past 15 years.

HM Ships Sheffield and Newcastle were the sixth and seventh Type 26 names to be revealed, during ministerial visits to Yorkshire and Tyneside on November 22.

The eighth was announced as HMS Edinburgh – no big surprise as Defence Secretary Gavin Williamson was standing by the Nelson Monument on Calton Hill in the Scottish capital when he made the announcement on November 29, the eve of St Andrew’s Day.

HMS Sheffield – the fifth of the Type 26s to be built – will be the fourth ship to bear the name, which is a relatively recent addition to the annals of the Royal Navy.

The first ‘Shiny Sheff’ – a nickname that reportedly derived from the use of stainless steel instead of brass for ship’s fittings – was a Town-class light cruiser launched in the summer of 1936.

Sheffield was the first Royal Navy warship to be fitted with operational radar (a Type 79Y) in August 1938, and she went on to have an active war, protecting Arctic convoys, operating in the Channel and the Atlantic, supporting landings in the Mediterranean and paying a role in the sinking of both Bismarck and Scharnhorst.

She survived the war and, after becoming the last wartime cruiser to be refitted, was finally scrapped on the Clyde in 1967, not far from where the Type 26 class is being built.

The second vessel to be named for the Steel City was the name-ship of the Type 42 class of destroyers, launched in the summer of 1971.

Her sea trials were lengthy to give the Sea Dart anti-air missile system to bed in, but she will be forever remembered for an air attack that was pressed home.

Argentine missile attack that set her ablaze on 4 May 1982 off the Falklands.

An air-launched Exocet missile from an Argentinian warplane struck Sheffield amidships on 4 May 1982 off the Falklands, entering the hull some 8ft above the waterline, killing 20 sailors in the galley area and computer room.

A fierce blaze ensued, and because the water main had been ruptured the flames spread, despite valiant efforts over the course of several hours by the ship’s company to fight the fires.

As Sheffield and two frigates – HM Ships Arrow and Yarmouth – lay exposed to further attacks, and the Sea Dart magazines were at risk of igniting, the decision was made to abandon ship.

Over the following days inspections were made of the now burnt-out hulk to see if anything could be salvaged, and plans were made to shore up the hole in her hull and tow her to South Georgia, but heavy seas caused flooding through the gap in her side and she sank while under tow by Yarmouth on 10 May.

The third Sheffield was a Type 22 frigate, originally slated to be called Bruiser but renamed in honour of the destroyer.

She was launched in March 1986, and decommissioned in late 2002 after a 14-year career – though she still serves today, under the Chilean flag as Almirante Williams.

HMS Newcastle, the sixth Type 26 to be built, will be the ninth warship to bear the name of the city on the Tyne – a pedigree that stretches back to a frigate launched in 1653.

Three further fourth-rate ships followed, the last being sold in 1850; a decade later a screw frigate became the fifth Newcastle.

The next two ships to bear the name were both Town-class cruisers; Newcastle No 6 was launched in 1909 and saw service in the Far East and South America throughout the Great War before she was broken up in 1923.

Her successor, laid down as HMS Minotaur, was launched in 1937 and proved an effective unit during World War 2, operating in the Atlantic and Mediterranean.

She was badly damaged by an E-boat torpedo attack in mid-1942 and, with a large hole in her bows patched up, had to make her way slowly via the Indian Ocean and Atlantic to New York, where she underwent extensive repairs.

She ended the war in the Far East, and she undertook further duties in the region in the 1950s, serving as a flagship in the Korean War and playing a part in the Malayan Emergency.

The eighth Newcastle was a Type 42 destroyer and sister ship of Sheffield; she was launched in 1975 and served around the world, whether patrolling the Falklands or Caribbean, carrying out diplomatic visits in Australasia or supporting exercises in Northern Europe.

She also protected aircraft carrier HMS Invincible off Kosovo in 1999, but was decommissioned after a 30-year career and sold for scrap.

There have been six HMS Edinburghs to date, with the first being a Scottish Navy fifth-rate which was transferred to the Royal Navy in 1707.

Following two fifth-rates, the fourth HMS Edinburgh was a Colossus-class battleship of 1882 which was sold in 1910 having served in the Mediterranean and home waters, and having also served as a target ship to test (and prove the unreliability of) British armour-piercing shells.

The fifth Edinburgh was a World War 2 Town-class cruiser, a modern, fast (up to 33 knots) vessel commissioned just weeks before the outbreak of hostilities.

She escorted convoys to West Africa, the Middle East and the Soviet Union as well as taking part in operations in northern Europe, and it was while escorting a convoy from Murmansk in mid-1942 that the cruiser was crippled by torpedo strikes.

An attempt was made to tow her back to Murmansk, but the tow was abandoned when three German destroyers attacked (one German ship had to be scuttled and the others ran for safety as the doomed cruiser and her escorts successfully fought back).

The badly-damaged Edinburgh finally succumbed to a British torpedo from escorting destroyer HMS Foresight in the Barents Sea, taking 4.5 tons of gold with her – part payment by the Soviets for war materiel and worth around £65m today. Most of the ingots were recovered in the 1980s.

The most recent Edinburgh was yet another Type 42, one of the stretched Batch 3 (Sheffield and Newcastle were Batch 1 ships, being 53ft shorter than Edinburgh).

She was launched in 1983, and as well as the standard Falklands patrols and flagship duties for NATO forces, the ‘Fortress of the Seas’ saw action in 2003 in the Second Gulf War, supporting Royal Marines forces ashore and protecting helicopter carrier HMS Ocean.

She was the last remaining 42 in the Fleet when she decommissioned just over five years ago, in June 2013.

The Type 26 programme will see all eight 8,000-ton anti-submarine frigates (the other five are HM Ships Glasgow, Cardiff, Belfast, Birmingham and London) built on the Clyde.

Construction of the Batch 1 trio – Glasgow, Cardiff and Belfast – is already under way at a cost of £3.7 billion. Glasgow is expected to enter service In the mid 2020s.

The completion of the remaining five ships, designated Batch 2, will see the total cost of the programme reach £8 billion.