From wooden clocks to a global Royal Navy

What is the connection between an 18th century Yorkshire-born carpenter and the emergence of the Royal Navy as the world’s greatest maritime force and the rapid expansion of the British Empire?

The answer is clocks – accurate clocks that kept good time on rolling, pitching sailing ships from the tropics to the frozen wastes in an environment heavy with salt water.

The Yorkshireman in question was John Harrison who was born in the West Riding in 1693 and moved with his family to Lincolnshire in around 1700. John followed his father’s trade, but in his spare time he indulged his fascination with clocks by building and repairing them.

He put his ‘day job’ to good use, and proved his skill, by building clocks with wooden movements, some of which are still on display today, more than 300 years after he created them; the first dates from 1713, when John was 20.

The significance of a lack of accurate clocks in ships came to a head when John was still a teenager.

In 1707 four Royal Navy warships from a squadron commanded by Sir Cloudesley Shovell ran aground on the Isles of Scilly during a fierce storm, resulting in the deaths of up to 2,000 sailors – including Shovell himself.

One of the main factors in the disaster was the guesswork involved in navigation at the time – without the ability to accurately work out the longitude of a vessel (its relationship to the Prime Meridian that runs through Greenwich) to make an accurate fix on a chart, the commander had to rely on dead reckoning, plotting a course from points which may be far removed from where the ship actually was.

Plotting errors made early in a passage would be magnified as time went on, and could result in a transatlantic voyage ending up hundreds of miles away from the intended destination.

The entrance to the English Channel was a particularly tricky situation, as the Isles of Scilly to the north, and the Channel Islands to the south, were surrounded by dangerous waters (and Scilly was said to be a wild and lawless place for those who made it ashore).

Such was the consternation in Britain that the Board of Longitude was set up in 1714 to address the problem, offering valuable prizes for workable solutions. And one man who set his mind to provide such a solution was Harrison.

With the need to create a device that was not affected by temperature, pressure, ship motion or humidity, Harrison came up with his first ‘sea clock’, known as H1, which was first mooted in 1730 but was not completed until 1736. It immediately went on trial in HMS Centurion on passage to Lisbon, and HMS Orford for the return leg. Although it lost time on the way out, it won the praise of Orford’s master and captain, but the Board wanted further proof.

Harrison was given a total of £1,000 to improve on the design over the following years, but clocks H2 and H3 did not turn out to be what he was aiming for.

Other clockmakers had made advances in building smaller, accurate watches by then, so Harrison incorporated some of that technology in his ‘Sea Watch No 1’, or H4 as it is also known.

H4 was sent on trial on board HMS Deptford on a passage from Portsmouth to Kingston, Jamaica, with only five seconds having been lost over the course of 81 days – which meant a longitudinal error of one nautical mile. Still the Board was not won over, stating that luck may have played a part in the experiment, so yet another trials was set up for H4, this time to Barbados.

Again the device proved very accurate, and the results of the trial were unveiled to the Board on 20 August 1765, 256 years ago today.

With the Board still dragging its feet, by 1768 Harrison had enlisted the help of King George III, who tested Harrison’s second Sea Watch (H5) himself and found it was accurate to within half a second per day.

It was another five years before Harrison was rewarded for his efforts – and even then it was just £8,750, a sum less than half of the £20,000 grand prize the Board had publicised, and which was never awarded (though in total Harrison received some £15,000 over the years in development grants).

By that time a copy of H4, made by British watchmaker Larcum Kendall and known as K1, was being used by Capt James Cook on his second voyage of discovery.

Harrison died in 1776 at the age of 82, having given the Royal Navy a huge advantage over rivals as it explored the world and expanded the British Empire.

Harrison’s H1, H2, H3 and H4 have all been restored and are on display at the Royal Observatory in Greenwich – the first three still keep time, but H4, which requires lubrication, is kept in a stopped state to prevent damage.

Our image, from the Imperial War Museum collection (© IWM A 34716) is Harrison’s H4, forerunner of the modern marine chronometer 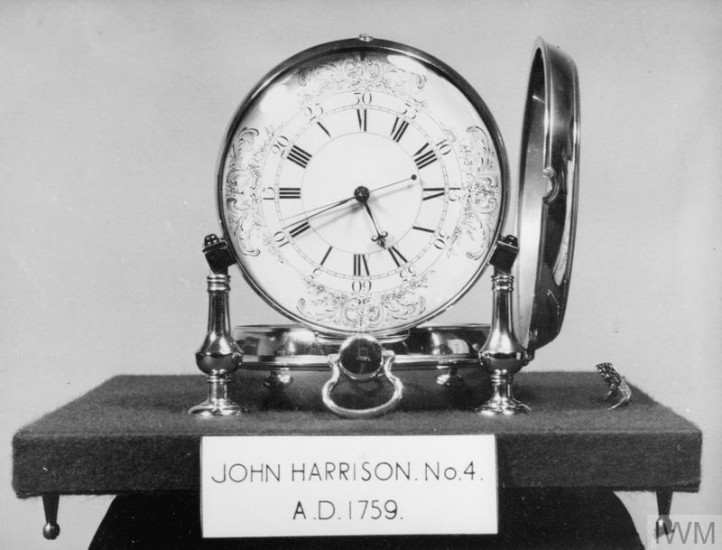