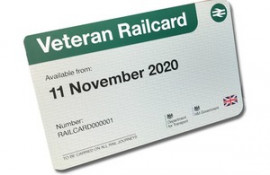 A new railcard offering the prospect of cheaper rail travel for military veterans is to be launched in the autumn.
The Veteran Railcard, available from Armistice Day – 11 November, will mean more than 830,000 veterans under the age of 60 will now be eligible for a third off many rail fares, which the government says will “help boost veterans’ job prospects and strengthen family bonds through cheaper travel.”
Anyone over the age of 60, veteran or not, is eligible for a Senior Railcard, which currently costs £30, while serving personnel can buy a Forces Railcard (cost £21).
The initiative, announced today by Transport Secretary Grant Shapps at an event in St Pancras station in London, forms part of government’s new veterans strategy to support former Servicemen and women.
Press reports indicate that the card will be available for an initial cost of £21 for a limited period, before rising to £30.
Joined by veterans at St Pancras, the Transport Secretary and the Minister for the Cabinet Office Oliver Dowden, representing the Office for Veterans Affairs (OVA), spoke of the government’s commitment to supporting former Service personnel and recognised their service to the country.
Mr Shapps said: “Every part of society should honour the debt we owe those who’ve served our country. I’m proud that the Department for Transport, together with other government colleagues and the rail industry, is doing its bit.
“This railcard will help open up opportunities to veterans, whether through employment and retraining, or by strengthening links with friends and family. I believe that enabling former Service personnel to travel more easily is the least we can do.”
The railcard announcement forms part of the government’s veterans strategy; that action plan was also launched today, and outlines what government is doing to deliver more for veterans and sets out holistic support for those who served, in areas including community and relationships, employment and skills, health and wellbeing, finance and debt, housing, and contact with the law.
The strategy will be coordinated by the recently-established OVA.
Mr Dowden said: “The Office for Veterans’ Affairs was set up to get things done for our veterans. I am pleased to see that the OVA is already able to show it is achieving just this, working with the Department for Transport to deliver this railcard.
“Our new action plan will help to make the UK the best place in the world for veterans. The Office for Veterans’ Affairs will drive the plan from the heart of government, working to help veterans on jobs, housing and health, through better data and a more joined up approach.”
Minister for Defence People and Veterans Johnny Mercer said: “Discounted train travel is a fantastic way to recognise those who have served this country, and the speed at which plans have been worked up shows how seriously we are taking our commitments to make the UK the best country in the world to be a veteran.
“The railcard is only the start though, and I’m clear we need to do more to look after the people who so selflessly put their lives on the line to look after us.
“Now the action plan has been published, I look forward to continuing to drive forward this issue across government and the services we offer.”