Two Royal Navy minehunters have been formally decommissioned during a ceremony at Rosyth in Scotland.

Affiliates and friends gathered to give HMS Ramsey and HMS Blyth, both past of the Faslane-based First Mine Countermeasures Squadron (MCM1),  a fitting send-off and recall their 20 years of service.

The Sandown-class vessels spent a good part of their service abroad, working with international partners, and were often to be found in the Middle East or the Baltic regions.

During the ceremony, sailors from both ships formed a guard of honour, with HMS Blyth flying her decommissioning pennant and members of the Royal Marines Band Plymouth providing the music.

HMS Ramsey left Faslane for the final time in August last year, round the coast to Rosyth, near Edinburgh, where she has been prepared her for decommissioning.

HMS Blyth followed in her wake this year, leaving  the Clyde in mid-July this year.

Ramsey clocked up more than 175,000 miles during her 21 years under the White Ensign, carrying out tasks for the Royal Navy, for coalition forces, and for NATO groups.

Indeed, it was Ramsey and Blyth that formed the very first Aintree Task Unit, announced in July 2006, which saw them sail to the Arabian Gulf and establish the forward-deployed UK Mine Countermeasures Force in the region.

With the milestone of 15 years of continuous and permanent presence to be passed later this year, it is perhaps appropriate that the first two ships to contribute to the permanent MCMV presence in the Gulf Region decommissioned together.

“As the final Commanding Officer of HMS Ramsey I have the honour and privilege to be here as we say goodbye to a great ship, “said  Lt Cdr Joel Roberts.

“HMS Ramsey has given 21 years of operational service to the Royal Navy, and throughout her life it has been the members of her ship’s company, the people, who have made her what she is.”

He continued: “It is time to say farewell to a ship that has been both a home and a way of life to so many, and I am also delighted that the town of Ramsey in the Isle of Man can be represented by some of her affiliates who have joined us today.

“She will undoubtedly be missed, but rather than being sad, today is about remembering her duty and celebrating her 21 years of distinguished service.”

HMS Blyth has slightly more on the clock than her older sister – over 185,000 miles – with around seven years of operational service in the Gulf.

She also regularly deployed with Standing NATO Mine Counter Measures Groups 1 and 2 in the Baltic, North Sea and the Mediterranean, as well as operating in UK waters, sometimes clearing wartime ordnance from vital sea lanes and the approaches to ports.

Blyth and her crew worked right up to the end, most recently on coalition operations in the Middle East, as well as a deployed period in the Baltic and national tasking along the UK coast.

Speaking before the ship left Faslane, Blyth’s Commanding Officer Lt Cdr Simon Henderson said: “The whole crew are immensely proud of what this ship has achieved in its lifetime and particularly over the last few years.

“Our final entry into Rosyth will be a sad one and it will bring to an end the ship’s life under Royal Navy command, but we reflect on the many achievements that we have accomplished together, and we look forward to new opportunities to come.”

One special guest who attended the decommissioning was 12-year-old Bella Brown, from Kilcreggan, who was christened on board Ramsey in 2010 in the traditional Naval manner, using the ship’s bell as a font.

Bella said: “I have been lucky enough to visit the ship recently and to regularly see her operating in the Clyde, and I am sad to see HMS Ramsey decommissioning. I hope the ship will go on to similar happiness and success in the future.”

Bella’s dad Steve, a former Commanding Officer and now Admiralty Pilot, said: “A ship is so much more than just a place of work – it is a home, and her crew and their families form a unique bond.

“I have been lucky and honoured to serve with some amazing people on Ramsey and briefly on Blyth.”

HMS Ramsey’s ship’s bell will be engraved with Bella’s name, and arrangements for it to be put on public display at the ship’s affiliated town of Ramsey, Isle of Man, are under way.

Of the decommissioning ceremony, MCM 1 Squadron Commander Cdr Jim Lovell RN said: “Between them, HMS Blyth and HMS Ramsey have delivered 41 years of exceptional service in the Royal Navy.

“From their home on the Clyde, they have supported Britain’s nuclear deterrent, operated at the heart of NATO’s mine countermeasures forces and were the first minehunters to forward deploy to the Middle East as part of the UK’s continuous forward presence in the region; a presence that this year celebrates its 15th year.

“From peacetime to conflict it has taken a huge effort by the sailors that served in these two ships – one that we should be immensely proud of, and I wish to thank not only them, but the families that have supported them.”

Ramsey and Blyth will undergo further work at Rosyth before they are sold to Ukraine as part of an agreement to boost Ukraine’s naval capabilities.

The ship’s parent-squadron, MCM1, is currently undertaking Project Wilton – trials that will help shape the future of mine-hunting operations.

Wilton is an appropriate name for the project – HMS Wilton, an experimental Ton-class minehunter/sweeper, was the first warship in the world to be built using glass-reinforced plastic (GRP) and was affectionately known as HMS Tupperware.

Investing in new capabilities the Royal Navy is about to make a generational leap in mine countermeasures as it transitions towards autonomy.

Based on the Clyde, the Project Wilton team has taken possession of three autonomous boats which are being put through their paces.

The Wilton boats can be operated manually, remotely or autonomously and deploy either towed side-scan sonar systems or autonomous underwater vehicles.

This provides the ability to very accurately survey the seabed and, after analysis, determine the presence of mines or other underwater threats.

While the technology is being tested, five Sandown-class ships remain at Faslane, deploying on operations in the Middle East and elsewhere.

Following the decommissioning ceremony, the crew of HMS Blyth are taking well-earned summer leave before joining Blyth’s sister ship HMS Grimsby for another period of operations later this year.

Our images, from the MOD, show the decommissioning ceremony at Rosyth, and also Steve Brown and his daughter Bella with HMS Ramsey’s ship’s bell 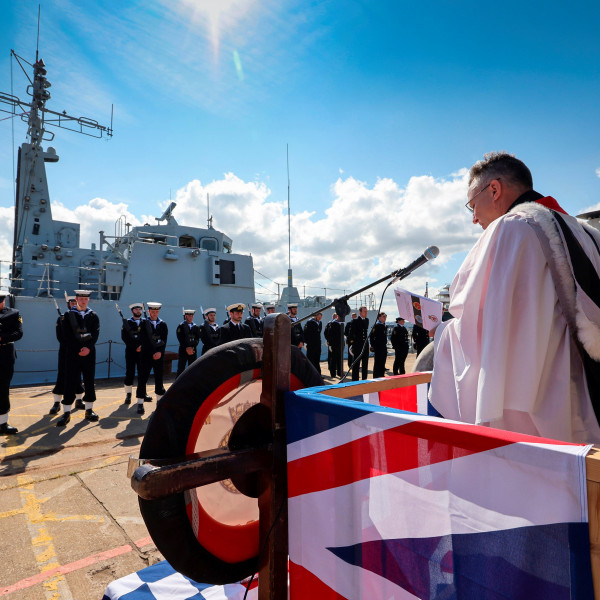 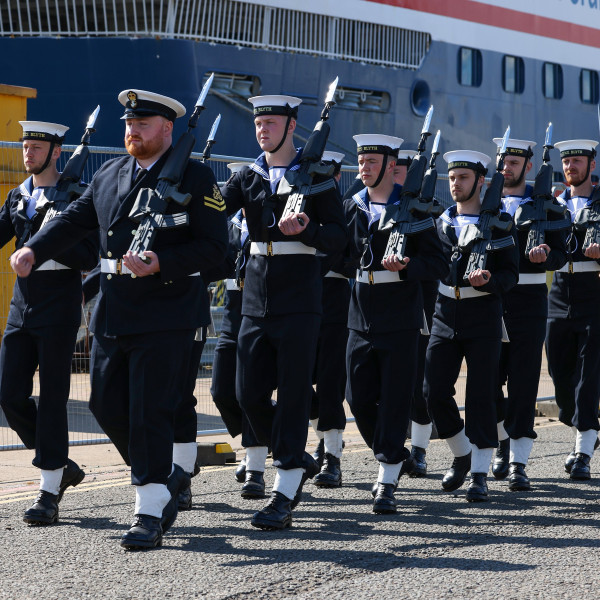 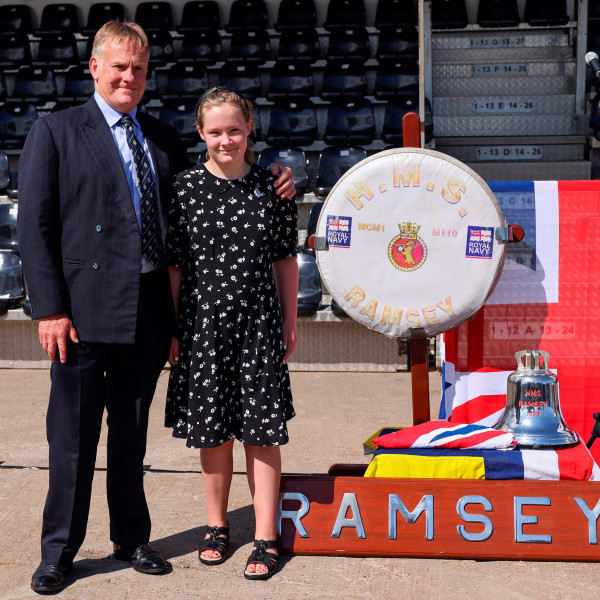 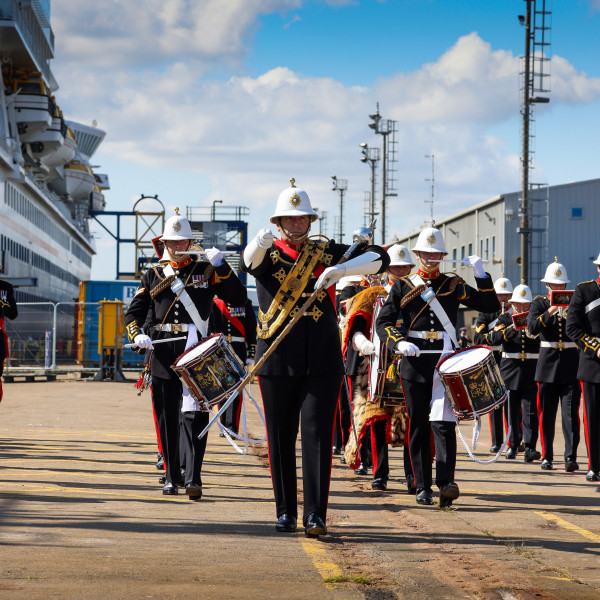