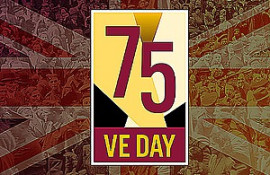 Events planned to commemorate the 75th anniversary of Victory in Europe (VE) Day in May have been scaled back to protect veterans’ health from the coronavirus pandemic.
The changes, in line with the latest expert medical and scientific advice, mean a veterans’ procession down the Mall and a gathering in St James’s Park, both in London, will no longer take place, and major events in Edinburgh and Cardiff are also affected.

The UK Government and the Devolved Administrations will announce new programmes shortly, allowing the British public to thank the wartime generation for their fortitude and sacrifices.

Culture Secretary Oliver Dowden said: “It is with a very heavy heart that we have to scale back our VE Day commemorations.

“Veterans always have and will be at the centre of our plans and our key priority right now is to protect their health and wellbeing.

“In these unprecedented circumstances I hope that the public will understand why we have made this difficult decision and I hope they will join us in saying thank you to the generation who gave so much on May 8th.

“We will ensure that we mark this important event and will provide an update on plans shortly.”

Planned events in Scotland to mark 75 years since VE Day, including a parade and concert in Edinburgh, are also being rethought.

Scottish Government Veterans Minister Graeme Dey said: “I regret that we are having to reschedule these events, a decision which has been taken in line with official advice on large gatherings during the coronavirus outbreak.

“Communities and, most importantly, veterans will have the opportunity to join events at a later date to pay tribute to the sacrifices of those from the Allied and Commonwealth nations.

“We will provide details of these in due course.”

In Wales, postponed events include a drumhead service and military parade at Cardiff Bay and a National Service of Thanksgiving at Llandaff Cathedral.

Welsh Government Minister for Housing and Local Government Julie James said: “It is with regret that events to mark the 75th anniversary of VE Day in Wales have had to be postponed due to the outbreak of coronavirus in Wales.

“The decision is in line with the current public health guidance on mass gatherings and the wellbeing of veterans and the public.

“The Welsh Government will mark the occasion in a way that is appropriate to the current circumstances.”

Plans to mark VJ Day 75 on 15 August, marking the Allied victory over Japan and the end of World War 2 will take into account public health guidance in place at that time.

The Royal British Legion, which was making arrangements for hundreds of veterans to visit London for commemorations over the VE Day weekend in London, said the charity has “taken the difficult decision not to continue with plans to facilitate attendance for members of the Second World War generation at national events in London.”

The RBL’s statement continued: “This decision is based on expert advice to protect the health of over 1,000 members of our Second World War generation.

“Whilst we recognise this will be deeply disappointing for those due to attend, and those involved in the delivery of the events, the protection of the most vulnerable within our society must remain the priority at this time.

“The Royal British Legion is in contact with all those who entered the ballot to attend the events to inform them and ensure they have the support they need during these unprecedented times.

“We are continuing to work with the Government and other partner organisations to identify ways that we can still commemorate the anniversary of VE Day on Friday 8th May and pay tribute to our Second World War generation.

“Details of our alternative commemorations will be updated through Legion channels when confirmed.”

The coronavirus pandemic has resulted in further closures and cancellations of showcase events and museums in the wider Royal Navy community.

The Royal Navy International Air Day, due to take place at RNAS Yeovilton in Somerset on Saturday 1 July, has been called off.
A statement from the Royal Navy explained that “this decision to cancel has been made as a prudent measure and in accordance with Government guidance on Covid-19.”
The statement continued: “We are making sensible and proportionate adjustments to non-essential activity, these decisions are made on a case by case basis to minimise the impact of Covid-19.
“Our priority has always been to deliver a safe and enjoyable event for our patrons.
“In times of such unprecedented uncertainty, the Royal Navy, RNAS Yeovilton and AHA Events Ltd have had to make the difficult decision to cancel the Royal Navy International Air Day 2020.
“All tickets purchased will be refunded – more details to follow in due course.
“In the meantime, we ask for your patience while we undertake this process due to current working conditions.
“Updates will be made via email and our social media channels.
“We apologise for any inconvenience caused and would like to take this opportunity to thank our loyal patrons, sponsors, exhibitors, participants, emergency services, contractors, station personnel and the many other stakeholders for their continued support in making Air Day the success it has become.”
The Air Day – the Fleet Air Arm’s main public showcase, attracting over 30,000 visitors –features aircraft and displays from military and civilian organisations across Europe and beyond.

The announcement followed a decision last week by the National Museum of the Royal Navy (NMRN) to close its sites in response to the escalating Covid-19 situation – museums in Portsmouth, Gosport, Belfast, Yeovilton and Hartlepool closed on 18 March until further notice.
The museum pointed out that there had been no diagnosed cases of the virus on site, but managers across the Museum and Heritage sector collectively decided that closure was the best decision to maintain the health and wellbeing of staff, volunteers and visitors.
With the NMRN being a charity, relying heavily ticket sales – and with the majority of visits being made between April and September – it faces challenging times and encourages supporters to help with ongoing costs by visiting the online donation platform at https://secure.artezglobal.com/registrant/donate.aspx…
Tickets already purchased for NMRN remain valid and visits can be deferred to later in the year, while details of terms and conditions around the Portsmouth Pass and other promotional tickets with specified redemption dates are being reviewed – there will be further information in the coming weeks.
Further information is available from www.nmrn.org.uk/ and the NMRN social media channels.
The National Maritime Museum, part of Royal Museums Greenwich, is also closed until at least 1 May, and the Imperial War Museum – of which HMS Belfast is part of the collection – closed down its sites until further notice.
Details of these museums are available at www.rmg.co.uk/national-maritime-museum and www.iwm.org.uk/ and updates will be posted on their social media channels.