Naval heroes – and brothers of a much-loved novelist

Jane Austen is regarded as one of Britain’s greatest literary figures, having written dazzling novels that are still avidly read, analysed and adapted in the 21st century.

But back in the early 19th century it was not the witty, observant Jane who looked likely to add lustre to the Austen name – the author and her work were not widely recognised until decades after her death in 1817.

Instead it was her brothers who steadily rose to positions of prominence through careers in the Royal Navy.

Of the two it was elder brother Francis, or Frank, who died on 10 August 1865, who made the greater impression.

He joined the Royal Navy in April 1786 at the age of 12, studying at the Royal Naval Academy in Portsmouth Dockyard before joining his first ship, the frigate HMS Perseverance, on the East Indies Station.

He was promoted Midshipman in 1789 (still aged just 15) and Lieutenant three years later, returning to England from the Far East in late 1793 having served in a number of ships, from a sloop to a smaller ship of the line.

Frank saw service in European waters and the Caribbean over the next few years, and first took command of his own ship – sloop HMS Peterel – in 1799, as he was by that time a seasoned Naval officer of 25 years of age.

His command of Peterel was notable for the fact she captured some 40 ships, and he took part in a number of successful actions, including blockades of Genoa and Abu Qir in 1800.

Frank gained a reputation for caring about the welfare of his crews, and continued to rise up the ranks, making Captain in 1800.

Although his ship HMS Canopus took part in activities leading up to the Battle of Trafalgar, Frank was ordered to detach from the Fleet before the action, being tasked with convoy duties in the Mediterranean, and so missed one of the defining moments in Naval history.

But that omission did not hinder Frank, who went on to command more ships of the line, including HMS Elephant, which had once been Nelson’s flagship. Frank commanded seven ships in total – one fewer than his younger brother was to manage.

In 1830 Frank was promoted Rear Admiral, and knighted in 1837, some 20 years after the death of his sister.

The following year he made Vice Admiral, and in 1844 he became Commander-in-Chief of the North America and West Indies Station, with HMS Vindictive as his flagship, protecting British commercial shipping during the Mexican-American War and disrupting the transatlantic slave trade.

In April 1863 he was promoted Admiral of the Fleet, and died just over two years later, at the age of 91, at his home, Portsdown Lodge, on the northern slope of Portsdown Hill close to the old London road and the George Inn, which still stands today. He is buried close by in the churchyard of St Peter and St Paul Church in Wymering.

Jane’s younger brother Charles – the youngest of the Austen family’s eight children – was born in 1779 and like his older brother joined the Senior Service at the age of 12.

He also attended the Royal Naval Academy in Portsmouth and went on to see plenty of action as a young officer, including a series of attacks on Spanish privateers at the end of the 18th century.

He spent five years on the North America and West Indies Station, and like his brother commanded both frigates and smaller ships of the line on both sides of the Atlantic, as well as a small squadron of frigates.

Back on the western side of the Atlantic Austen scored notable successes against the slave trade, but at the end of 1830 he was forced to return to England as a result of a serious accident.

He took some time to recover, but he returned to service in 1838, and made Rear Admiral in 1846, taking command of the East Indies and China Station four years later.

Unlike Frank, Charles was never to return to his home county of Hampshire and retirement; he died of cholera in Myanmar in October 1852, and is buried at Trincomalee in what is now Sri Lanka.

Charles was said to be close to his novelist sister, and it is assumed that it was Charles who helped Jane with the Naval aspects and terminology of her novel Mansfield Park, in which the heroine, Portsmouth-born Fanny Price, is the daughter of a wounded Marine veteran and the brother of young Naval officer William.

Our image is of the Garrison Church in Old Portsmouth, also known as the Domus Dei, which features in Mansfield Park and which would have been familiar sight to the Austen brothers as well as to jane on one of her visits to the town.

The church is the last remaining element of a hospice established in the early 13th century, and it was in a building beside this church that King Charles II married Catherine of Braganza in 1662.

The church was badly damaged by a German air raid in January 1941, and the nave remains roofless to this day. 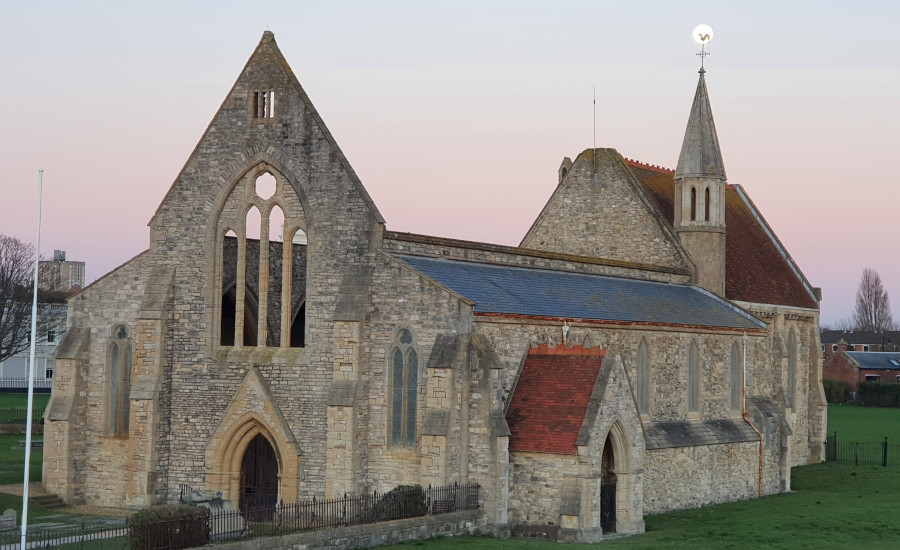