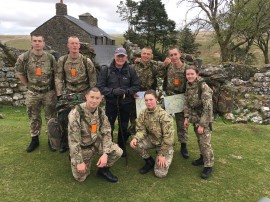 A group of Royal Naval Association veterans who support trainees at HMS Raleigh have a new leader.
Former CPOMA Les Yeoman, aged 69, from Plymouth, spent 33 years in the Mob, and is now one of the 21 RNA mentors passing on their experience, knowledge and love of the Navy to those just setting off on their careers.
RNA branches involved include Plymouth, Liskeard, Torpoint, Saltash and Bodmin.
Les has taken over the role of RNA coordinator – essentially the main point of contact for those working with trainees at the Torpoint base.
The mentors work alongside Raleigh instructors to help and guide recruits as they make the transition from civilians to military personnel.
Les, originally from Grimsby, left the Royal Navy in 2000 but continued serving with the Royal Fleet Auxiliary until 2010, after which he forged new links with the Naval Service by becoming a mentor in 2015.
He is assigned to Nelson Division, and makes regular visits to ‘his’ class during their ten-week training course.
His particular skillset as a Mountain Leader means Les is a particularly valuable man to have about during exercises on Dartmoor and at Pier Cellars, on the Rame Peninsula, when he can assist staff in teaching map and compass work.
Les said: “Currently there are four ladies and 17 gentlemen from various branches of the RNA, and we are hoping to attract more ex-Servicemen and women to join us.
“Meeting new recruits on day one and seeing them smartly turned out at the passing-out parade in week ten is very rewarding, having been allowed the privilege of imparting our experience and knowledge.
“This includes our involvement in adventurous training and sporting activities at the highest levels and, of course, a considerable amount of ‘dits’ and sea-stories…”
Mentoring – formally known as Culture, Ethos and Values sessions - was introduced at HMS Raleigh in 2008, and falls within the RNA’s first charitable objective: “to further the efficiency and wellbeing of the Service, preserve its traditions and encourage recruiting.”
Captain Richard Harris, the Commanding Officer of HMS Raleigh, said: “The mentors play a key role in helping us instil the Royal Navy’s ethos and core values of commitment, courage, discipline, respect for others, integrity and loyalty, into the recruits.
“They also give the recruits a better understanding of the commitment required of Service personnel.
“Their involvement in initial naval training is hugely appreciated by both our recruits and the staff.”
Anyone interested in becoming a mentor at Raleigh should contact Les on telephone 07795231397 or email: lesyeo3@gmail.com
Phase 2 trainees, learning their specialist skills at HMS Collingwood and Sultan in Hampshire, are also within the RNA mentoring system; in these cases groups of trainees usually travel to Portsmouth Naval Base for briefings from RNA Central Office staff within the historic dockyard, in the shadow of HMS Victory and the Georgian storehouses that now form part of the National Museum of the Royal Navy.