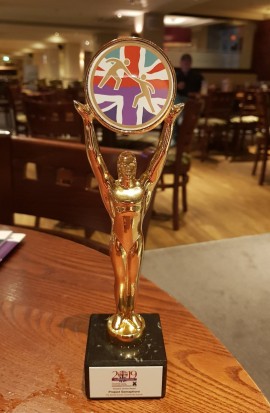 An RNA initiative that has helped connect lonely veterans to the Internet has won a prestigious national award.

Project Semaphore, one of the Association’s flagship initiatives, came top in the People’s Choice poll at the Soldiering On Awards.

The project aims to help alleviate loneliness and improve the finances of digitally-isolated veterans by issuing Apple iPads and training individuals in how to benefit from access to the Internet.

Once they are trained, housebound veterans and those with limited mobility can use their new iPads to message and video-call far-flung family members or old friends, and can take up new hobbies or research the history of their old ships online.

The project also has financial benefits, providing access to considerable savings through energy deals, price-comparison websites, online shopping, paper-free banking and the like which are not available offline.

Estimates available at the start of the project in 2016 indicated that an individual could be £1,000 a year worse off if they did not have access to offers available online.

A range of benefits and advice services are also most easily accessed through the Internet.

The training programme, carried out by more than 70 volunteers, also provides social interaction; many of the trainers were RNA members but Naval Reservists and youngsters from Sea Cadet units also got involved, reinforcing the inclusivity of the Royal Naval family.

More than 700 iPads, specially configured for Naval veterans with easy access to apps including the RNA and Veterans’ Gateway, have been distributed to people living alone and in communal homes – and not just former sailors; Army and RAF veterans have also been included where it was deemed divisive to equip Navy pensioners but not those from the sister Services.

Supported by the Aged Veterans Fund, Greenwich Hospital and RNRMC amongst others, the project’s first phase is complete, and phase 2 – which is primed and ready to go – seeks to spread the net wider, working with more than 50 separate charities and organisations to connect even more veterans.

The Soldiering On Awards ceremony was held at the Park Plaza Westminster Bridge Hotel in London, with Carol Vorderman – a staunch supporter of the Services – as host.

Thousands of individuals and organisations were nominated for the 13 awards, and the short-listed candidates gave judges – including representatives of the three Services (WO1 Nick Sharland, Warrant Officer of the Naval Service was one) - a tough job to select class winners.

The People’s Choice class was one of two decided by a public vote, and Project Semaphore topped the shortlist of six contenders.

Project Manager Sarah Clewes, herself a Naval veteran, said: “We are delighted to have won – thank you so much to all those who voted for us.

“This Award is recognition for all those who have given their time to volunteer, stepped outside their comfort zone to learn how to use an iPad, and for the range of like-minded organisations and charities who have helped us reach more veterans.

“I have seen the extraordinary effect that this programme has had on lonely individuals, with veterans in their 90s suddenly able to chat regularly with relatives on the far side of the world – relatives they had not seen or spoken to in years.

“Our former General Secretary, Paul Quinn, likens it to throwing open the curtain in a darkened room and letting the light flood in – that is the magnitude of the change.”

“A need was identified, funding was secured and Sarah, with a dedicated team of volunteers, has managed the project through to the success it is today.

“Not only does it make life easier and more rewarding for our veterans, but it brings the whole Naval family together for the greater good, reinforcing the RNA watchword of ‘once Navy, always Navy.’

“I am delighted that the project, and Sarah’s role in developing it, have been recognised in such a prestigious awards ceremony.”