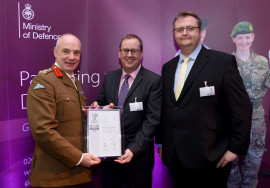 AW Ship Management, who are corporate sponsors of the RNA, were among 34 London-based businesses recognised for their support and commitment to the Armed Forces at a ceremony in the Cavalry and Guards Club, Piccadilly.

Paul said: “AW Ship Management have had the opportunity to work closely with serving UK Forces personnel on multiple projects, which has given us a clear understanding of the skills and work ethic present.

“We are pleased to have been recognised as a company that has committed to support ex-Forces personnel and Reserves and recognise the advantages that their employment brings.”

Brig Marc Overton, Chairman of the Reserve Forces and Cadets Association for Greater London (GL RFCA), who hosted the event, told the audience: “What you have done and continue to do makes a huge difference to the Armed Forces family.

“Thank you to you and all of your staff for going the extra mile in recognising the important contribution that our serving personnel, veterans and their families make to the nation.”

The ERS recognises organisations that clearly demonstrate support for defence personnel, including giving paid leave for reservists to train in readiness for future military operations, offering work placements or interviews to veterans and actively encouraging staff to join the reserve forces.

AW Ship Management covers everything from new build, through valuation, repair and maintenance, to crewing and purchasing.

The company traces its history back more than a century, and takes its place amongst the leaders in the UK’s maritime industry.