Command of a highly-effective maritime security force has passed from one Royal Navy officer to another – but the vital work of the ships at sea continues uninterrupted.

Over the past four months, the Operation Sentinel task group has been overseeing the safety of ships passing through two bottlenecks in the Gulf.

That equates to almost 1,000 merchant ships – that’s millions of tonnes of cargo, particularly fuel, which keep the wheels of commerce and industry spinning, not least in the UK.

The force – which periodically included the Gulf-based Type 23 frigate HMS Montrose as well as the former patrol vessel HMS Clyde, now serving with the Bahraini Navy as RBNS Al-Zubara – has been directed from Bahrain since March by Cdre Adrian Fryer and an international team.

The Sentinel task group aims to ensure the safe passage of ships through the Bab al Mandab (BAM), at the southern end of the Red Sea, and Strait of Hormuz, which separates Iran from the UAE and the Omani exclave of Musendam.

Around 50 ships a day pass through the BAM, which at its narrowest point between Yemen on the Arabian Peninsula and Djibouti in Africa measures 20 miles – similar to the width of the Channel at Dover. Most of these ships will be heading to or from the Suez Canal, which leads to the Mediterranean.

Some 115 ships – predominantly tankers and gas carriers – sail into and out of the Gulf every 24 hours through the Strait of Hormuz, which is just over 20 wide at its narrowest point.

Should either of these choke points become unsafe for merchant shipping the impact on the UK alone – which relies on regular supplies of liquid natural gas from the Gulf – would be severe.

For example, the accidental blockage of the Suez Canal in March by the container ship Ever Given cost global trade more than £280m per hour, or £6bn per day.

Under Cdre Fryer’s command, the task group has watched over 960 merchant ships which fly the flags of the nations committed to Operation Sentinel’s parent body, the International Maritime Security Construct – UK, US, Albania, Bahrain, Estonia, Lithuania, Saudi Arabia and the United Arab Emirates.

The task group also sends out around 2,500 radio messages every month providing the latest updates and warnings about potential dangers as well as reassurance, and the participating ships conduct a series of regular exercises and combined training to maintain readiness.

Cdre Ruddock said: “Anything that rocks the confidence in nations’ ability to sustain stability within our communities needs to be taken seriously.

“CTF Sentinel is charged with executing its mission diligently and does its part to keep open the arteries of trade in this region.”

Pictured is HMS Montrose at sea in the Gulf in 2020 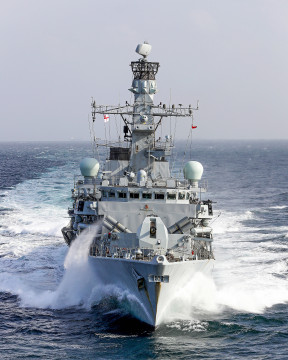