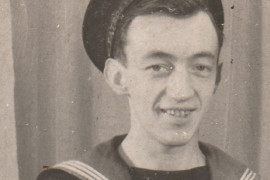 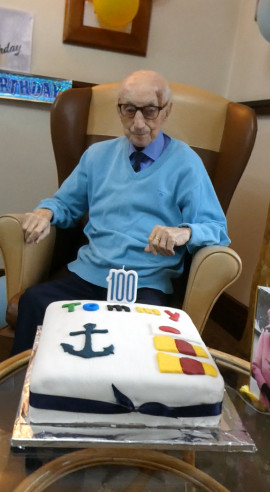 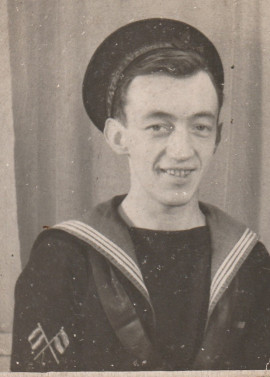 Tommy had begun a career in the print industry – he took a job as an apprentice typesetter on the Tyrone Constitution in Omagh – before the war.

But still a teenager, he travelled to Belfast in November 1940 to take his medical and sign up for the Royal Navy.

Just before his 20th birthday, in January 1941, Tommy reported to Devonport Dockyard, but the start of his training was delayed because of the pounding the city was getting from German bombers.

Tommy instead found himself on fire watch in the dockyard every night, but eventually he was released to begin his career in Naval communication.

His training was conducted at the hostilities-only establishment, HMS Impregnable, in St Budeaux, a converted Naval Detention Quarters (DQs), where he learned his trade as a signaller.

After that he spent time at HMS Drake before being drafted to the Royal Naval Patrol Service (RNPS) Central Depot at HMS Europa in Lowestoft – known to sailors as the Sparrow’s Nest.

He was there barely a fortnight before he was sent back to Plymouth and French battleship Paris, the RNPS depot ship in Devonport, joining the Motor Minesweeper MMS 43.

Paris had been taken over during Operation Catapult in July 1940, the British scheme to seize French warships, thereby denying their use to the Germans after the fall of France.

Paris spent the remainder of the war as a depot ship for the British and a barracks ship for the Polish Navy.

They proved efficient ships for their wartime tasks, but were of limited use in peacetime.

Tommy was with MMS 43 for around 1 months, scouring the seas in home waters as well as spells in Gibraltar and a trip to Russia, or at least towards Russia – his ship went so far with its convoy, then escort duties were taken over by fleet minesweepers.

He was also disappointed that he never managed to get ashore in Iceland.

Shortly before the war in Europe ended Tommy married Dolly at St Columba’s Church in Omagh, and in the late summer of 1945 he returned to HMS Europa in Lowestoft for refresher training and a new billet in HMS Ceto.

Ceto was a 130-ton diesel yacht owned by the Earl Fitzwilliam and requisitioned on the outbreak of war in 1939.

She initially served as a danlaying vessel – danlayers were a vital element of a minesweeper force, laying dans, or special marker buoys, to indicate swept and safe channels as well as making sure there were no gaps left in swept areas.

Within months she had been assigned to Portsmouth then Devonport as a ‘direction finding calibration yacht’, and in early 1943 she switched to a similar role in the Western Approaches.

Tommy was demobbed in February 1946 and returned to his old job on the Tyrone Constitution, going on to complete more than 50 years as a Linotype operator and compositor. The paper itself, established in 1844, still publishes today.

However, Tommy did not completely sever his links with the Senior Service, as he was attached to the Royal Fleet Reserve, Devonport, from 1950-55.

And in February 1953 he was recalled to service because of the Korean War – after a refresher course at HMS Drake he was sent off to HMS Rooke, Gibraltar, and a place in the Windmill Hill Signal Station at the top of the Rock.

He also had a spell in destroyer HMS Sluys which, although she spent much of her time in home waters, also gave Tommy another trip to the Med before he returned to civilian life in 1954.

Pictured is Tommy during his Royal Navy service, and celebrating his 100th birthday.