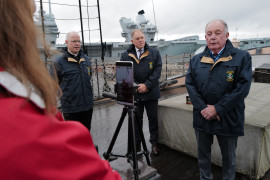 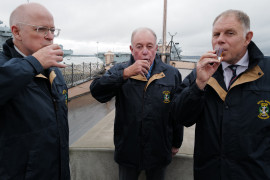 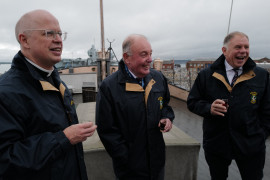 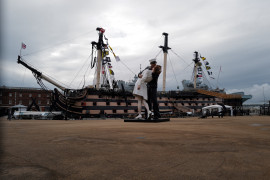 Trafalgar Day 2020 on board HMS Victory

Senior officials of the Royal Naval Association marked the 215th anniversary of the Battle of Trafalgar with a ceremony on the poop deck on HMS Victory in Portsmouth Historic Dockyard.

RNA National President Vice Admiral John McAnally, RNA General Secretary Capt Bill Oliphant and the Chaplain of the Fleet, the Venerable Martyn Gough – who is also the Hon Chaplain of the RNA – gathered on the poop deck of Nelson’s flagship to pay tribute to the men who fought and fell in battle off the coast of Spain in 1805.

The event, which was streamed live online through Facebook, was organised on the open deck to ensure it was Covid safe - you can watch the video by clicking on the attachment below.

Capt Oliphant said that he was pleased that the National Museum of the Royal Navy had allowed the trio to transmit the toast to the Immortal Memory of Horatio Lord Nelson on Trafalgar Day.

He pointed out the two new aircraft carriers, HMS Queen Elizabeth and HMS Prince of Wales, which were visible from the deck of the old man o’war, meaning that more than 250 years of Naval history were to be seen in close proximity.

The Chaplain of the Fleet recited Nelson’s Prayer, written by the admiral just before the battle in which he lost his life.

He was followed by Vice Admiral McAnally, who spoke a little about the battle before he proposed the toast in Pusser’s Rum.

Vice Admiral McAnally briefly spoke of Nelson’s qualities , saying he had raised the art of being an admiral to the sublime. But more than that, Nelson was “an extraordinarily kind and lovable man, who never forgot a shipmate and who always did his best to help those who had served with him’” he said.

“He was the ultimate expression of all those qualities that made our country wealthy, prosperous, free and secure,” concluded Vice Adml McAnally, adding he believed there should be an annual public holiday in his honour on Trafalgar Day.

The Battle of Trafalgar was the culmination of an ongoing attempt by Napoleon to break the British stranglehold on the Channel and the Royal Navy’s blockade of French naval forces.

With Nelson’s blockading fleet being hampered by a storm in early 1805, the French fleet under Villeneuve broke out of Toulon and headed to the Caribbean, where they joined forces with the Spanish.

Nelson followed the French across the Atlantic, then back to European waters.

With the threat of a French invasion having passed, Nelson enjoyed a rare break ashore before his flagship was ready to lead a fleet to confront the combined Franco-Spanish force which was at Cadiz.

The Franco-Spanish fleet numbered 33 ships of the line, including three enormous first rates of 130 and 112 guns – larger than anything in Nelson’s fleet, which numbered 27. Battle was joined early on 21 October off Cape Trafalgar, and Nelson’s unorthodox tactic of cutting the enemy’s line of battle was a crucial factor in the fierce fighting that followed.

Victory took a battering, and Nelson, easily identifiable as he led his men, was struck by a French bullet in the early afternoon.

He died around 4.30pm, having been told that the battle was all but won.

Villeneuve’s fleet was a sorry sight as the smoke cleared – 21 ships captured (though many were lost in the subsequent violent storm) and one destroyed, while the Royal Navy had not lost a single ship, though many (including Victory) were in a poor state.

While the victory at Trafalgar had little effect on Napoleon’s land campaign in Europe, it cemented the Royal Navy’s pre-eminence at sea and snuffed out the threat of a French invasion of Britain.