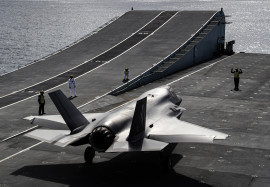 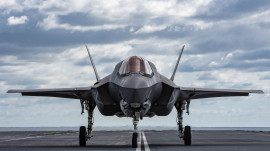 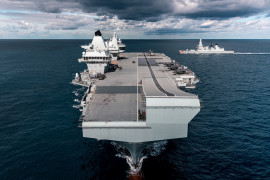 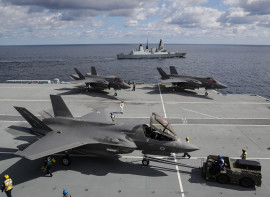 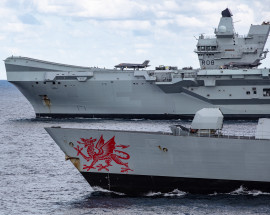 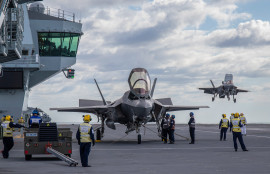 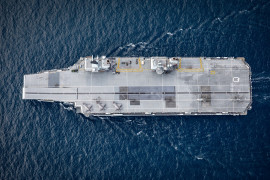 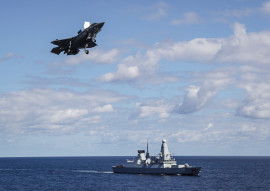 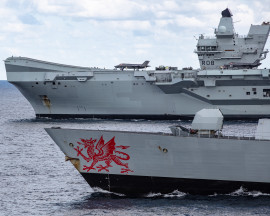 Another landmark in the development of the Royal Navy's latest aircraft carriers has been passed as British F-35B Lightning jets exercised with HMS Queen Elizabeth for the first time.
Lightning II jets have operated from the carrier before – they made more than 500 take-offs and landings over an 11-week period last year - but on that occasoin they were American aircraft.
This time up to seven of the fifth-generation fighters were flown by Royal Navy and RAF pilots in a programme of trials that allow ‘end-to-end’ testing of the aircraft and personnel to ensure the aircraft dovetail with the 65,000-tonne carrier.
The tests, carried out over five weeks, involve mission planning, arming the aircraft using the ship’s Highly Automated Weapon Handling System, flying missions and debriefing on completion.
Once fully operational, UK Carrier Strike Group will be ready for deployment around the world, using tailored combinations of ships, submarines, squadrons and personnel to work alongside allies.
HMS Queen Elizabeth left her home port of Portsmouth at the end of August, and is expected back in the UK around the beginning of December – during which month her sister HMS Prince of Wales is due to be commissioned.The carrier has been leading the Westlant 19 strike group in exercises off the east coast of North America, including a visit to Halifax, Nova Scotia, in Canada.
Type 45 destroyer HMS Dragon, Type 23 frigate HMS Northumberland and tanker RFA Tideforce complete the group, with Merlins from 814, 820 and 845 Naval Air Squadrons and Wildcats from 815 NAS providing the air component.
Royal Marines from Lima Company 42 Cdo are also on the deployment.
The Lockheed Martin Lightning II jets are single-seat stealth multi-role aircraft designed for fighter/ground attack roles. It first flew in late 2006, and the aircraft type has been tested to Mach 1.6 (over 1,200mph).
The UK ordered the F-35B short take-off vertical landing (STOVL) variant.
The pictures of the Lightning II trials (copyright Ministry of Defence/Crown Copyright 2019) were taken by Naval photographers LPhots Kyle Heller and Dan Shepherd.