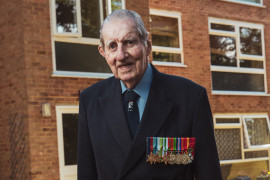 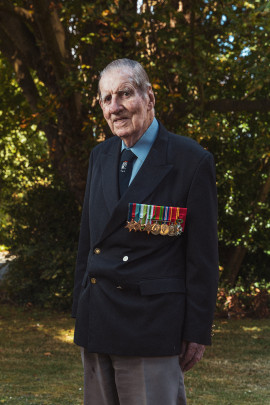 For one veteran of the Forgotten Fleet, a visit to Japan at the end of World War 2 completed an unusual family double.

Alf Lonsdale was one of the men who manned the warships fighting on in the Far East after war ended in Europe – a venture which began in the most mundane fashion.

“I was based in Victory at Pompey and got a chit one morning: report to Master at Arms,” said Alf. “I get down to the dockyard and I’m en route to Australia; I joined HMS Berwick, and off we went.”

The heavy cruiser dropped personnel at bases including Gibraltar and Bombay (now Mumbai), picking up stores and fuel along the way. Journey’s end for Alf was a tent on Warwick Farm racecourse in Sydney – aka HMS Golden Hind, the British Pacific Fleet transit camp.

A couple of days later he moved on to Brisbane by train, joining Landing Ship Infantry HMS Glengyle, a passenger/cargo ship built for the Glen Line and taken up by the Admiralty early in the war. Alf recalls picking up Australian troops from training camps and island-hopping towards Japan under Australian control, and that the British crew and Australian troops got on well.

“Basically we didn’t see too much action; at Morotai there was a bit of action there – we supplied a bit of cover for them as they landed, but once they disappeared off the beach into the scrub we were finished – it was back for another load.”

Alf’s role as a seaman included anti-aircraft gunner and coxswain of one of the 16 Landing Craft (Assault) the ship carried with her.

He recalls a flotilla of 40 to 50 ships leaving the Philippines in August 1945 and circling at sea for a couple of days – he believes it was while the Allies assessed the impact of the two atomic bombs.

Alf thinks Glengyle arrived in Kure just a few days after the first bomb flattened Hiroshima, some ten miles or so distant.

“Not much happened for two or three days, then one morning, when we did the morning parade on board, about 30 or 40 of us were detailed off ashore, onto some trucks, and down the coast to Hiroshima – we were a clearing-up party down there,” said Alf. “Not a pretty sight, by any means, but somebody’s got to do it.”

He finds it hard to describe what he saw of the devastated city. “I wouldn’t say it was awesome, but it was certainly something none of us had seen before, and it wasn’t nice to look at,” he said.

“The Japs had already got a black market going – they didn’t waste much time – but I could see bridges completely knocked over sideways, and here and there people’s silhouettes against the wall where they had stopped the rays or whatever it was going along. I can remember it, but to describe it is not exactly my line. But not nice at all. It was just one big area of devastation.”

Alf said some of his colleagues went ashore for haircuts and the like, but he had little contact with local people, in the main because of the language barrier.

Alf thinks he was in Kure for the best part of a month, with aircraft carriers getting priority for passages home as they could carry the largest numbers of sick or wounded prisoners of war.

Having been away from home waters for more than a year, Glengyle made a low-key return from war – Alf was part of the skeleton crew that handed her back to her original owners on the Tyne.

Alf’s demob was similarly muted – a few days hanging about Portsmouth, “a cardboard box with a suit in it, and a trilby hat, for what it’s worth (I never wear one), then cheerio – that was it,” he said.

“My family weren’t exactly waiting for me when I got home – I only had mum and dad, and they were both indoors. I let myself in through the back door as usual, and that was it. They were pleased to see me, and no doubt I was pleased to see them.”

There was to be a sting in the tail for Alf. His mother had not told Alf that his father had been bedridden for almost a year, but refused to go to hospital.

“The next day, I’m chatting away to him, and he said ‘They want me to go into hospital, boy, and I think I might as well.’ So he went into hospital at two o’clock the next afternoon, and he passed away at two o’clock the next morning. I can’t help thinking that maybe he was waiting to see me back. Just a thought, but he certainly didn’t last long.”

Unusually for the time, Alf was not the first member of his family to visit Japan.

“My mother was in Japan in the First World War – she was secretary to Major Vickers, of  Vickers Armstrong, and he was no doubt out there selling munitions.

“She told me that at one o’clock one morning, there was a knock on her bedroom door, and it was ‘Miss King, get dressed and your passport quick, we’re off!’

“The situation had changed and so they went to the nearest port where they were – I think they were in Okinawa – across to Vladivostock and then by train across and home from Norway. And she was not then 20…”

Alf has never returned to Japan, though he has been back to Australia and Singapore, including a British Pacific Fleet reunion for the 50th anniversary in 1995.