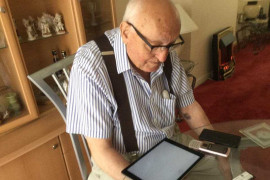 I use my I-pad every day it is fantastic! There are two pages on Facebook, one called lost oppos, ex sailors looking for old shipmates and there is a page for ex Raleigh ratings, that has brought back many memories!

I joined the Navy in 1952 as a junior stoker I was 17.  Did basic training then drafted to H.M.S Drake, after short period I got flown out to Malta to join H.M.S Chivalrus, months went by then transferred to H.M.S Euryalus, we sailed to Simonstown to become flagship of South Atlantic.  After 16 months returned to the UK back to Drake, had a draft to H.M.S. Baritone a coal burning boom ship, then I was drafted to the Adamant submarine depot ship, but alas I had got a medical problem so after 9 months sent to naval hospital in Plymouth from there I was discharged medically unfit.

Sarah the I-pad is a godsend for me, on New Year’s Day, put a message on Raleigh page and had 248 responses.  I talk to an old buddy every day, he is 86 I am a young sprig I am only 83.  I also read the news from Central Office, which is my branch.