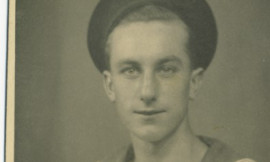 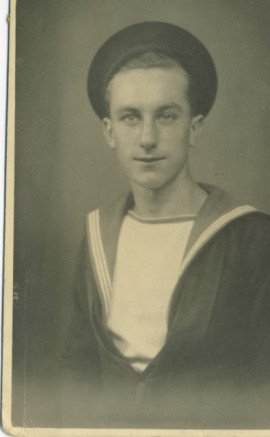 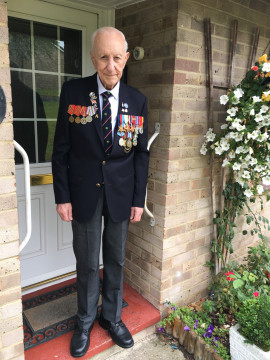 As a teenager Robert Batty travelled the world and saw sights that few back home in Britain would ever experience. Australia, New Zealand, Japan, Sri Lanka; it sounds like the perfect year out. But often uppermost in Robert’s mind was the need to dive for cover to avoid flaming aircraft wreckage or trying to avoid the vile stench of burning flesh…

Robert’s love of aircraft and interest in the Royal Navy naturally led him to the Fleet Air Arm when he volunteered at the age of 17 in February 1943. But his chance to become a Telegraphist Air Gunner was snatched away when he went down with pleurisy the week before his first posting, and instead he ended up at RAF Kirkham in Lancashire, training as an armourer.

After a rather agreeable period in the North West – the pleasures of Blackpool were on his doorstep – Robert joined 887 Naval Air Squadron, a Fleet fighter unit operating Seafires from the new aircraft carrier HMS Indefatigable.

Weeks of training around the UK (including Scotland, Northern Ireland, Somerset, Hampshire and Devon) ended when Indefatigable sailed to Scapa Flow to work with Arctic convoys and join the unsuccessful summer 1944 attacks on the German battleship Tirpitz in Norway.

Robert recalled that life in northern seas could be harsh – the carrier would pitch and roll in 60ft waves and ice formed on every surface. There were also accidents on board.

On one occasion, while he was duty armourer, a Seafire of 887 NAS crash-landed and landed on top of another aircraft; two men died instantly and a third minutes later – a sight Robert said he would never forget. Both he and the ship had a narrow escape during the Tirpitz attacks – he was on the flight deck in August 1944 when the bows bit deep into the cold waters of the Barents Sea, which flooded across the deck. Robert thought he would be swept over the side but managed to grab an anti-aircraft gun platform. The sudden manoeuvre was to avoid a torpedo that sped across Indefatigable’s bows and struck HMS Nabob, badly damaging the escort carrier.

After a brief deployment in HMS Implacable off the Norwegian coast, 887 rejoined Indefatigable, 33,000 tons, in Portsmouth.

The ship sailed on 24 November with around 2,500 men on board, along with 40 Seafires, 20 Avengers, nine Fireflies and six Hellcats, crossing the Bay of Biscay and speeding through the Straits of Gibraltar in darkness. She escorted a German hospital ship to Suez, and arrived in Colombo in what is now Sri Lanka two weeks before Christmas, where the squadron spent two weeks at a jungle airstrip.

The ship sailed on to Trincomalee, and on New Year’s Day 1945 launched strikes against Japanese oil refineries in Sumatra.

She was now part of what would become known as the Forgotten Fleet – the Royal Navy men and ships who fought on in the Far East weeks after the war in Europe was over, facing a relentless enemy half a world away from home.

Indefatigable was attacked on several occasions, but it wasn’t just the Japanese who threatened life and limb. On one occasion Robert was just about to step out of the island door when a fellow armourer pushed him back. His shipmate had seen a landing aircraft miss the arrester wires; it bounced into the barrier and slammed into the side of the island.

Robert said on “many occasions” he had to run in front of the island or dive under a pom-pom gun position to avoid a crash.

After a few days in Fremantle and Sydney, the carrier joined a US Navy fleet on operations off Formosa, the Philippines, Miyako and the Caroline Islands. She then spent weeks supporting the amphibious invasion of Okinawa, when the carrier lost several pilots and aircraft.

On 1 April Indefatigable became the first British aircraft carrier to suffer a kamikaze strike, which hit the flight deck, blasting small holes in the deck and the island. Fuel was ignited in the hangar below and 14 men killed by the blast or shrapnel. Robert was one of 30 injured, but his wounds were patched up and he was soon back on duty – as was the ship.

While American carriers with wooden flight decks were put out of action by kamikaze, British carriers had armoured decks, so as soon as the fires were out and the debris swept off the flight deck, Indefatigable was ready for operations again in an hour or so.

With Okinawa taken after a bloody battle, Indefatigable returned to Sydney for six weeks of repairs, and Robert and his mates were able to relax, sightseeing, visiting the Luna Park funfair and playing golf in between duties; they were also hosted by an Australian family. But all too soon it was back to the bombs and bullets as Indefatigable joined an Anglo-American fleet that pounded the main Japanese islands.

Not long afterwards the atomic bombs were dropped, and Robert recalled the carrier’s captain telling them to look at the port side, where the battleships HMS King George V was flying the signal ‘Cease hostilities against the Japanese.’

The ship’s company gathered on the deck, cheering – but an hour later they were looking for cover again as a Japanese bomber attacked the ship; it was promptly shot down.

After featuring in the signing of surrender documents in Tokyo Bay, Indefatigable’s next duties were two return trips to Sydney to repatriate Allied prisoners of war, and with the ship’s aircraft parked on the flight deck the POWs were housed in the hangar. The carrier then toured Perth, Melbourne, Sydney, Wellington and Auckland, returning to Sydney just before Christmas.

In early 1946 sailed for home via St Helena, Cape Town and Gibraltar, reaching Portsmouth on 16 March 1946. A couple of days later, Robert managed to get home to Wiltshire for a few days’ leave, laden with souvenirs for his family including packets of tea, silk stockings, wooden elephants, watches, cigarettes, tins of tobacco, tinned fruit, handbags and more.

Robert was demobbed in Portsmouth; after picking up his demob suit and clothing, and handing back his Naval kit, he was issued with a leave pass for three months leave until his release day in August 1946, some pay and a rail warrant.

Robert said “It’s a long time since the end of World War 2. A lot of things I want to forget and don’t want to talk about as I get very emotional. Most of my time was working on aircraft in the hangar wondering what was going on when the guns were firing, or having to keep your wits about you on the flight deck ready to take cover from crashing aircraft and being shot at by the kamikaze.

“My time in the British East Indies and Pacific Fleet was quite a mixture and I remember the great relief when we sailing into Fremantle, Australia after action in the Indian Ocean and the warm welcome we received before sailing on to Sydney, and then the welcome from crowds of Australians and small boats as we sailed into Sydney Harbour. When we left Sydney to join up with the American Fleet and I was working round the clock to keep the aircraft serviceable and armed up, being duty armourer on the flight deck one’s driving force was survival.

“You needed to have your eyes everywhere, ready to dive for cover – not just because the ship was being attacked, but aircraft crashes on deck due to aircraft damaged by flak and bad landings due to bad weather and so on. The things I remember mostly were when hostilities were over and we took the POWs back to Sydney, the visits to Adelaide, Melbourne, Sydney in Australia and Wellington and Auckland in New Zealand – the huge reception we were given on the victory parades through the streets.”