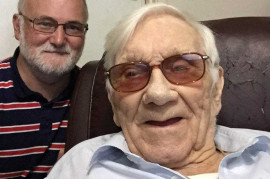 Thank you for the iPad, I use it with the help of Shipmate Hill

I join the RN in 1939 at the outbreak of WW11. I volunteered for the Navy but was too young at the start.
However a few months later after my 16th birthday on 31/12 I was called up and got a train warrant to leave my home in Middlesex to join HMS Ganges.

I did my basic training and then was posted to HMS Dido while it was still in built at Birkenhead. I was boy radar operator RP3. I spend the whole war on the Dido and was demobbed 5 months after VJ Day. I join the RNA sometime in the 1970s.

I heard about Project Semaphore from my Shipmate Hill, who had heard a presentation on it at a branch meeting by Julie Royston.

I find it handy for keeping in touch via Skype with my family in New Zealand and Australia. I have also discovered the joys of Facebook and all the interesting sites including the RNA one.

I also have started using online banking to pay my bills. Which is certainly easier them going out to do them. I would certainly recommend your project to any Shipmate.