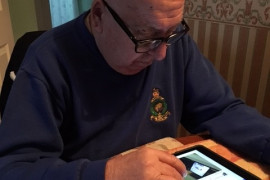 I heard about Project Semaphore from Bulwark Association and initially thought I would use an iPad to:
Keep in touch with family and friends using FaceTime and Facebook.
Get access to the Internet and explore new things like Google, YouTube & The News. To send emails and receive them.
Learn new skills by using the iPad as a camera and using it to store important dates and memories.

Having used the iPad for a while, I use it to read the News online, use Facebook, use YouTube to watch the Royal Marines band, to check Butlins old and not so old redcoats, I also use it to make friends on the over 60s friendship group.

Being supported by a fellow Shipmate made it easy to set up the device and learn how to use it.  Thank you to the Sea Cadets at Chatham.

Thank you for giving me the iPad to allow me to communicate with the outside world, and to do what I enjoy.