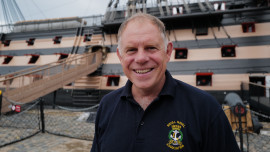 What a fabulous few weeks it’s been around the RNA and what a busy few months to come. Well done to those who took advantage of the RNA £5 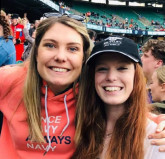 discount on their tickets for the Army v Navy match at Twickenham. By all accounts you witnessed a humdinger of a match of RN backs flair v strong Army forwards, with the Navy leading until the last 10 minutes. Eventually, we went down gallantly 35-27 with only a last second Army score making the result look comfortable.

I’m keen to make more of this fantastic event in the future for getting our members out so Branch Social secretaries please take note. The Branch and Club Support Fund can help with your transport costs and I’m hopeful the National Council will again support a discount on the tickets. I’ll confirm dates as soon as it is published but it’s usually the w/e of the first Bank Holiday in May.

I didn’t make it to the rugby this year as I was in Leith – you can’t do everything. Well done to the Saturday night Virtual Totters who organised a magnificent Reunion w/e in Edinburgh which started with a reception on the Friday evening

in the royal sitting room in HMY Britannia – an area of this fabulous vessel which is roped off and not normally open to the public. It really was a privilege to be there – thank you for the invitation. Andy Fletcher and Jeffrey Hughes RVM deserve special mention as does Karen Elliott for pulling together a full weekend programme. BZ Wrexham and Edinburgh Branches.

Thanks also go to Portland Branch who were kind enough to invite me to their dinner night the weekend before – something which has been in the diary for over 2 years and, through the vagaries and uncertainties of Covid, only achievable eventually now. Just great to see peopleout and getting together again though after the pandemic although I must confess it was a bit scary going back to Portland again after all these years. For me Portland meant FOST – this was a much more pleasant experience! So, for two weekends on the trot, I’ve heard people say, “This is what the RNA is all about.” It certainly is!

Shipmates will be cheered to know that Nigel picked up his gong last month, or rather the Lord Lieutenant of Hampshire pinned it to Nigel’s chest. I believe he didn’t flinch! Nigel received national recognition in the NY Honours List with a BEM as our long suffering Membership Secretary for 13 years. He retired late last year although you may still see him at the odd event as he has been kind enough to offer his services as our photographer. Heartiest congrats Shipmate.

Thank you too to the Portsmouth Naval Base Commander, Cdre JJ Bailey, who cut the turf on the 40th anniversary of the day that the initial ships of the Portsmouth element of the Falklands Task Group sailed in 1982. Along with the Association of Wrens, we plan to install two memorial benches 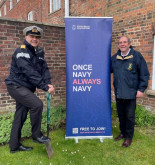 on the grass at the end of Central Office to commemorate the two Portsmouth based ships which didn’t return after the conflict.

That leads me nicely onto Falklands 40 commemorative weekend 17-19 June. Remember, this w/e isn’t just for South Atlantic Medal holders but for all. Accom is plentiful and inexpensive as the University has kindly giving access to modern student accom which, I have recently discovered, these days includes double beds! We still want more cyclists, more golfers, more motorcycle riders and more classic cars for their events on Friday 17th June but I regret the fishing has had to be cancelled due to too few participants. And if none of that appeals, the cricket match against the RMA at Burnaby Rd promises to be a blood sport to rival uckers!

Finally, very best wishes to those participating in the Standard Bearers’ competition at COLLINGWOOD this weekend – should be fun! See you there!