Monday 10 May 1982 saw one British task force ship finally sink, and another set out on a mission which could have had the same result.

Type 42 destroyer HMS Sheffield, devastated by an Exocet missile attack on 4 May, had burned and smouldered for days afterwards, but was take in tow on 9 May in the hope she could be eased across the unforgiving South Atlantic to South Georgia, where a decision could be made on what to do with her.

But that unforgiving ocean rendered the decision unnecessary. As frigate HMS Yarmouth hauled the battered destroyer towards the eastern margin of the Total Exclusion Zone heavy seas started to pour into her hull through the gaping hole torn in her flank by the Argentine missile.

Having managed the tow for 27 hours, Yarmouth was forced to let go as Sheffield foundered and sank.

Sheffield’s sister ship, HMS Glasgow, was engaged in picket duty and bombardment of Stanley on 10 May, in company with Type 22 frigate HMS Brilliant – the ’42-22 combo’ that was developed after the strike on HMS Sheffield.

This was regarded as the best belts-and-braces arrangement, with the Type 42 destroyer’s surface-to-air Sea Dart missiles taking on incoming aircraft and missiles up to around 50 miles out, then the Type 22 frigate’s Seawolf (in theory) catching anything that got past Sea Dart, with a range of some five miles.

Brilliant could not add to the heavy bombardment as she was one of the Batch 1 Type 22s, which were armed with Seawolf and Exocet missiles, and had no 4.5in guns, though her Lynx helicopter was used to allow a Royal Artillery officer to spot the fall of Glasgow’s shells.

Later in the evening of 10 May two Type 21 frigates – HMS Arrow and HMS Alacrity – were sent inshore to carry out some reconnaissance work.

Arrow sailed along the part of the coast of East Falkland, but detected no signs of Argentine forces.

Alacrity had an all together more challenging assignment, and one which could have ended in disaster.

With no minesweeping force available to work through Falkland Sound, which separates East and West Falkland, British task force planners had no idea whether their preferred landing site at San Carlos Water, an arm of Falkland Sound, was defended by mines sown by Argentine forces.

So Alacrity was given the unenviable task of making a transit of the sound, from south to north, to assess the risk of mines, as well as looking out for Argentine vessels attempting to resupply the troops ashore.

Alacrity, under Cdr Chris Craig, broke away from the main Carrier Battle Group at midday on 10 May and covered the 100-mile passage to the coast of the Falklands at 25 knots, avoiding Argentine onshore radar on her way in.

Later that same afternoon Alacrity’s Lynx was sent up to reconnoitre the bays and harbours of both East and West Falkland – not an easy task in the gloom and fog – while the frigate continued to steam west until she reached the southern end of Falkland Sound.

In the last few minutes of 10 May Alacrity entered Falkland Sound, and began a slow, silent transit northwards, nerves on edge and fingers crossed that neither mines nor shore batteries would bring her to a shuddering halt in the confined waters, which in places had a navigable channel less than two miles wide.

Back in the northern hemisphere, the first elements of yet another task group sailed south to bolster Operation Corporate.

Type 82 destroyer HMS Bristol  – the first and only ship of her class – led a flotilla of reinforcements that eventually included Leander-class frigates HM ships Andromeda, Minerva and Penelope, Type 21 frigates HM ships Active and Avenger and tanker RFA Olna, which had sailed from Portsmouth Harbour with the destroyer, carrying with her two Wessex 5 helicopters of B Flight, 848 Naval Air Squadron.

Also leaving the South Coast of the UK was aviation support ship RFA Engadine, with four Wessex HU5 helicopters of A Flight 847 NAS embarked, which sailed from Devonport.

Travelling along with Engadine was a maintenance crew from 825 NAS. 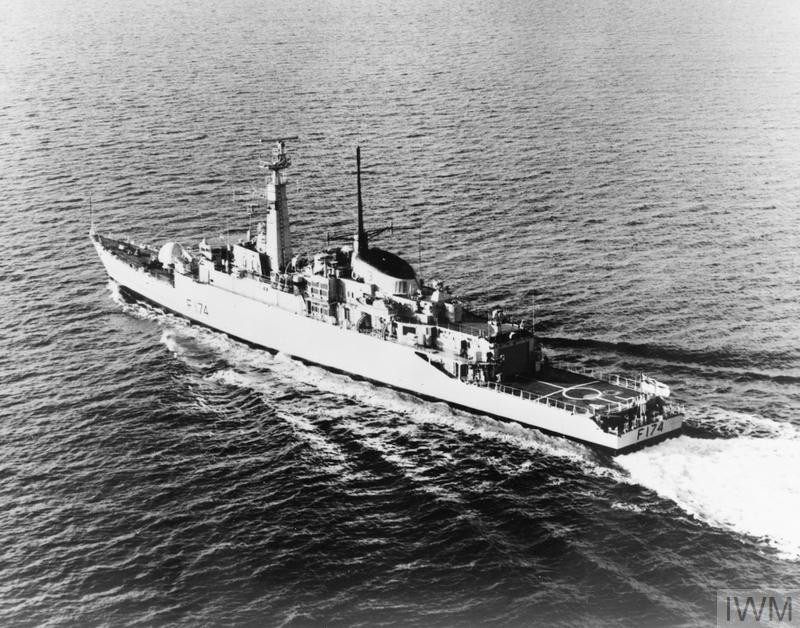