11 May: Narrow escape for frigates

Having left the Carrier Battle Group at midday the previous day, and started her hazardous mission just before midnight, Type 21 frigate HMS Alacrity spent the early hours of Tuesday 11 May 1982 edging her way northwards in Falkland Sound, the body of water separating East and West Falkland.

Although on the lookout for Argentine supply vessels, a crucial part of the mission was to assess the risk of mines, which would have a profound influence on British plans to land troops at San Carlos Water, a bay off the northern part of Falkland Sound.

As she was, in effect, in the role of a very large mine countermeasures vessel that night, Alacrity was running as quietly as possible, with her ship’s company on high alert in case of an incoming shell or a detonated mine.

About an hour into her transit Alacrity sent her Lynx helicopter up (in very poor weather) to reconnoitre the coastline and to act as a decoy for any Argentine attack, either by air or from artillery ashore.

Shortly after 0030 the bridge team in Alacrity spotted a radar contact some six miles away and increased speed to catch up; the contact also sped up and began taking evasive action.

The frigate began firing at the unknown vessel shortly after 0100, and after a short barrage of shells a vivid orange glow was seen through the rain and fog.

The flash signalled the end of Argentine naval supply ship ARA Isla de los Estados, a near-4,000-ton former merchant vessel that was used as a transport ship and minelayer – in the vicinity of Port Stanley – after the Argentine invasion of the Falkland Islands.

And the violence of the explosion, which sank the ship and killed all but two of her crew of 24, was down to her cargo of tonnes of aviation fuel and ammunition.

This was the only surface action between British and Argentine ships during Operation Corporate.

Having alerted any troops ashore as to her presence, Alacrity recovered her Lynx and dashed through the remainder of the Sound, reaching the northern entrance at 0300 (having detected no mines).

Having rendezvoused with sister ship HMS Arrow, the two frigates began to head back to the Carrier Battle Group, but were soon spotted by Argentine submarine ARA San Luis, which fired two torpedoes.

One failed to leave the tube, and the other is believed to have struck Arrow’s towed decoy, which was found to be damaged when it was later recovered.

San Luis, which had suffered a fault in its fire control system, did not have time to attack again before the frigates were out of range, and the submarine, which had been at sea for a month or more, began her return passage to Argentina that day.

There was no ready replacement for the boat, so the British amphibious build-up went ahead untroubled by enemy submarines.

On 11 May another ’42-22 combo’ – this time Type 42 destroyer HMS Coventry and Type 22 frigate HMS Broadsword – took up air raid picket duties to the west of West Falkland to try to catch enemy aircraft as they approached from the mainland, but the weather remained too poor for Argentine attacks so the warships later returned to the Carrier Battle Group.

The hastily-assembled 11th Mine Countermeasures Squadron arrived at Ascension Island on 11 May to refuel, and was expecting to take on one of the two Fleet Clearance Diving Teams (FCDTs) that had flown into the island on the same day aboard an RAF C-130 Hercules.

Instead, FCDT 3 was ordered to join Landing Ship Logistic RFA Sir Bedivere for the rest of their journey south.

Hospital ship HMHS Uganda arrived in the Total Exclusion Zone (TEZ) on 11 May, but as a non-combatant she had to remain well away from the Carrier Battle Group, on the edge of TEZ.

Amongst the auxiliaries there was the typical bustle of activity on 11 May, with tanker RFA Bayleaf sailing from Gibraltar to Ascension, ammunition and stores ship RFA Regent joining the Carrier Battle Group in the TEZ and tanker RFA Tidepool joining the southbound Amphibious Group, led by assault ships HMS Fearless and HMS Intrepid.

Today’s image from the Imperial War Museum collection (© IWM MH 27575) shows Type 22 frigate HMS Broadsword, which on 11 May 1982 was on air raid picket duties with Type 42 destroyer HMS Coventry to the west of the Falkland Islands. 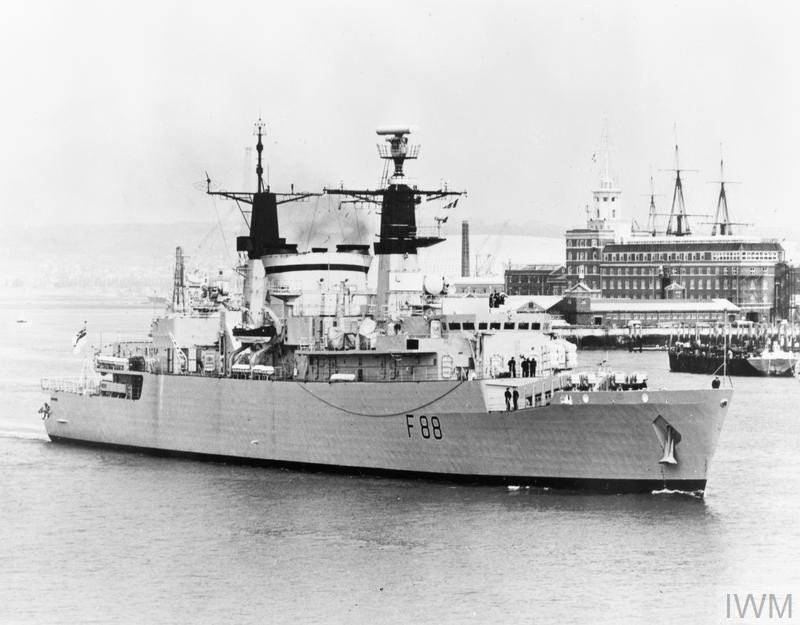