The spell of bad weather – which normally halted any prospect of Argentine air attacks – continued into Friday 4 June 1982 in the Falkland Islands, allowing  British troops of 3 Commando Brigade and 5th Infantry Brigade to gain further footholds in the eastern part of East Falkland, within striking distance of the capital Stanley.

But it also grounded Combat Air Patrols by Sea Harriers, based on the aircraft carriers HMS Hermes and HMS Invincible, and meant that helicopter operations were carried out at a slower pace than was desirable.

Despite the fog and low cloud – which began to clear during the day – Argentine aircraft carried out high-level bombing raids on both Teal Inlet (3 Cdo Bde’s forward operating base) and the Mount Kent area, but none of the bombs landed near British men or equipment.

The ongoing two-pronged supply operation saw Landing Ships Logistic load up at Ajax Bay on San Carlos Water and slip along the coasts of East Falkland to the forward operating bases at Teal Inlet (north coast) and Fitzroy/Bluff Cove, on the southern route taken by 5th Infantry Brigade.

On 4 June the ships involved in those runs were RFA Sir Percivale, which returned to San Carlos Water on 4 June after unloading at Teal Inlet, and RFA Sir Tristram to Fitzroy.

While this was happening, 45 Cdo RM completed their ‘yomp’ from Teal Inlet to Mount Kent.

One of the escorting warships of the task group started her long, slow  journey back to the UK.

Leander-class frigate HMS Argonaut had been badly damaged in the bombing raids of 21 May; it was several days before the bombs were made safe and further repairs had to be made before she was in a sound enough condition to make the arduous passage through the Atlantic.

Having informed the British that she was then intending to sail into Fox Bay and Port Howard on West Falkland, a naval bombardment planned for later that day had to be cancelled.

Type 42 destroyer HMS Exeter sent her Lynx helicopter up later that day to determine whether Argentine Exocet missiles had been set up ashore, but there was no sign of such equipment and the ship eventually returned to San Carlos Water.

Late into the evening, HMS Invincible headed south to take advantage of the improving weather and send up the first Combat Air Patrol by Sea Harriers for a couple of days.

Argentine air defences did not respond, so the jets returned to Invincible, which made her way back to the rest of the carrier group to the east.

Overnight on 4 June, members of Fleet Clearance Diving Team 1 carried out an underwater search of Bluff Cove, looking for mines or explosives that in advance of the planned amphibious landings at the site a few days later.

Damaged Type 42 destroyer HMS Glasgow continued her return journey to the UK, at reduced speed, and was refuelled at sea by Fleet tanker RFA Plumleaf.

Another tanker, RFA Olna, supplied troopship Canberra with more than 2,600 tons of fuel in a replenishment at sea lasting more than ten hours, she followed that by refuelling Type 21 frigate HMS Ambuscade.

Today’s image from the Imperial War Museum collection (© IWM CT 394) shows RFA Olna, one of the Royal Fleet Auxiliary tankers that supplied fuel to ships involved in Operation Corporate; on 4 June 1982 she refuelled both troopship Canberra and frigate HMS Ambuscade at sea. 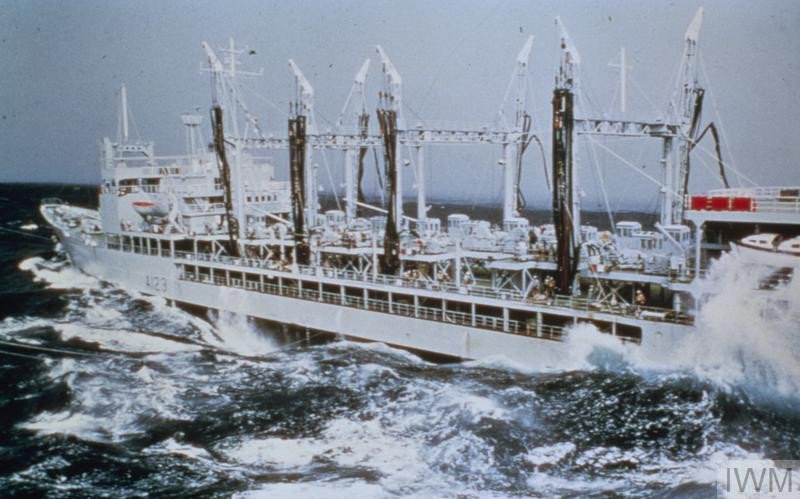