Following the heavy loss of life in the air attacks on Bluff Cove and Fitzroy the previous day, maintaining morale amongst British troops would have been high on the agenda as Wednesday 9 June 1982 dawned bright and cold in the Falkland Islands.

Much had been heard of the plight of Argentine conscripts, who were short of food and suitable clothing and equipment as they sat in Stanley and the high ground around the capital waiting for the inevitable attack from a fearsome combination of Royal Marines, Paras, Guardsmen and Gurkhas.

But in miserable, wintry conditions, with the seemingly ever-present cold winds and frequent low cloud, British soldiers and Marines were also finding it a challenge to keep their spirits up, particularly as their bid to take the high ground that rings Stanley meant that they were not only out on exposed mountainsides, with little chance to dig in, but they often had to trek down to lower ground to pick up stores, food and ammunition and then carry iy back up to their positions.

Hypothermia was a considerable risk in those conditions, and wet clothing – particularly socks and boots – was a constant curse; trench foot became a common ailment for medics to treat in the field hospital at Ajax Bay on San Carlos Water.

The air attacks of the day before, which brought about the loss of almost 60 men in RFA Sir Galahad, RFA Sir Tristram and landing craft Foxtrot Four, delayed the British advance across East Falkland by a day or so at most, but the momentum was maintained as the front line crept ever closer to Stanley.

Maj Gen Jeremy Moore RM, Commander Land Forces in the Falklands, was mindful that the weather was deteriorating fast, and that by the end of the month harsh conditions ashore, and perhaps even more so at sea, would threaten to end Operation Corporate,

So the final assault on Stanley would have to be launched within the next two weeks or so –in the end, or course, that final push would be unleashed within just a few days.

The two Landing Ships Logistic continued to burn and smoulder in Bluff Cove while victims of the bombing raid, many of whom suffered serious burns, were being cared for at Ajax Bay and later in hospital ship HMHS Uganda, operating out of her Red Cross box.

On the western coast of East Falkland, RFA Engadine anchored in San Carlos Water in the role of support ship for Wessex helicopters; her four Wessex HU5s of 847 Naval Air Squadron flew off to join the wider logistical effort.

Today’s image from the Imperial War Museum collection (© IWM FKD 2032) shows a Royal Marine Commando brewing up in the mountains around Port Stanley. 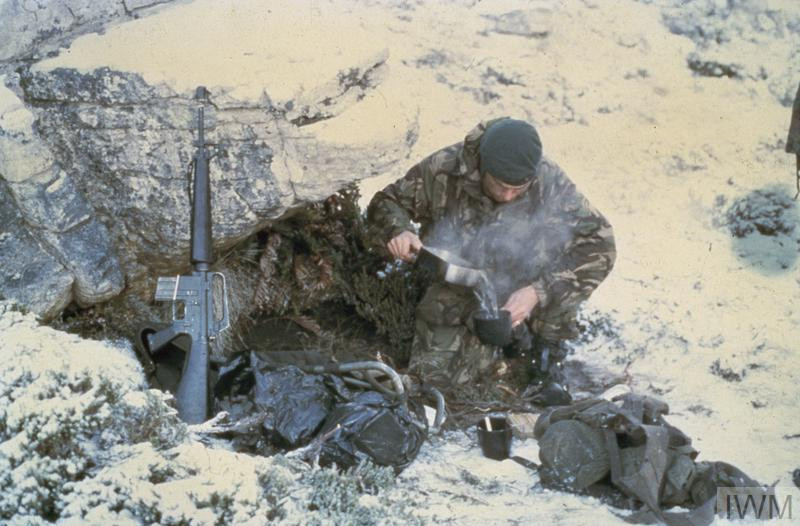