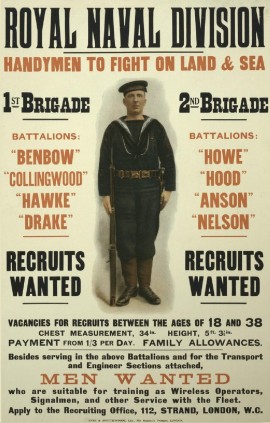 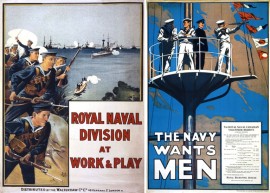 History of the Royal Naval Division

History of the Royal Naval Division

The 63rd (Royal Naval) Division was a United Kingdom infantry division of the First World War. It was originally formed as the Royal Naval Division at the outbreak of the war, from Royal Navy and Royal Marine reservists and volunteers, who were not needed for service at sea. The division fought at Antwerp in 1914 and at Gallipoli in 1915. In 1916, following many losses among the original naval volunteers, the division was transferred to the British Army as the 63rd (Royal Naval) Division, re-using the number from the disbanded second-line 63rd (2nd Northumbrian) Division Territorial Force. As an Army formation, it fought on the Western Front for the remainder of the war.

When the war began, a Marine Brigade of four infantry battalions was formed from men of the Royal Marine Light Infantry and Royal Marine Artillery. The brigade was to be an Advanced Base Force, according to a pre-war plan to furnish the Admiralty with a means to take, fortify or defend temporary naval bases for fleet operations or the supply of army field forces. The recruits included regular marines and those mobilised from the Fleet Reserve; each battalion was drawn from one of the big naval depot ports-Chatham, Portsmouth, Plymouth & Deal and named accordingly.

On 16 August, Winston Churchill the First Lord of the Admiralty, decided to embody two more naval brigades with surplus men of the Naval Reserve, to join with the Marine Brigade to produce a composite Royal Naval Division. A few petty officers and ratings were transferred from the navy to provide a cadre and some officers were provided by the army but most of the recruits were reservists or men who had volunteered on the outbreak of war. The eight battalions were named after naval commanders, Drake, Benbow, Hawke, Collingwood, Nelson, Howe, Hood and Anson, later being numbered from 1st to 8th. The division was not provided with medical, artillery or engineer units, consisting solely of lightly-equipped infantry. Many of the trained men were then reclaimed for fleet service and recruits were taken over at the request of the War Office, from oversubscribed north-country regiments. Training was slow, except for the Marine Brigade which had its own infrastructure, because resources were needed for the rapid expansion of the Army and naval ratings were not issued with field equipment or khaki uniforms before being embarked for overseas service. On 26 August, the Marine Brigade was sent to Ostend to reinforce the Belgian garrison, after German cavalry had appeared in the area. The brigade returned on 1 September after the scare subsided and on 3 September the Admiralty decided to train the two Naval Reserve brigades as infantry, to form an infantry division with the Marine Brigade. Rifles were drawn from Royal Navy stocks and only arrived at the end of September; these were older charger-loading Lee–Enfields rather than the modern Short Magazine Lee-Enfields issued to the army.