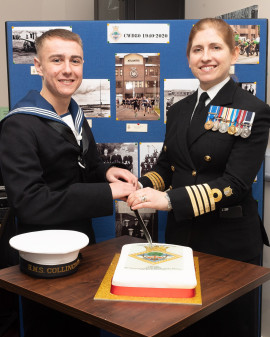 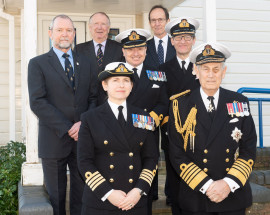 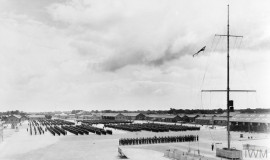 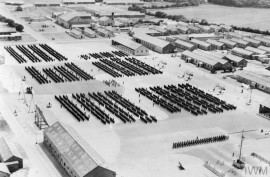 Personnel across HMS Collingwood came together at a church service to commemorate 80 years of training sailors at the Fareham establishment. Trainees first entered Collingwood’s gates on 10th January 1940 after the nation recognised the importance of well-organised training of sailors for front-line service during World War 2. From the original wooden huts built on marshland, Collingwood has since grown into the sprawling base it is today – the Royal Navy’s largest training establishment. The commemorative service was attended by a number of former Commanding Officers and many other friends and supporters, including the Mayor and Mayoress of Fareham, the Mayor of Gosport, Chaplain of the Fleet the Ven Martyn Gough, Capt John Voyce (HMS Sultan), Capt Beth Crowson (Institute of Naval Medicine) and Gary Tuff (Defence Munitions Gosport). Collingwood’s current CO, Capt Catherine Jordan, said: “It is an honour to be Captain of HMS Collingwood in this, its 80th year. “As we reflect on the vital service this establishment has given over the years, I’m pleased to be taking it forward into a new future, modernising training and encouraging all our personnel to reach their full potential within today’s Royal Navy.” Former First Sea Lord and Chief of Defence Staff Admiral of the Fleet the Lord Boyce, whose father served at HMS Collingwood in the 1940s, said: “It was an honour to be invited to the service today to celebrate HMS Collingwood’s 80 years. “Over this period of time, training across the Navy has been centralised here, which means HMS Collingwood is now at the very heart of today’s Royal Navy.” The commemoration service, held in the base’s chapel – one of the few remaining buildings the original recruits would have recognised – is the first in a series of events to be held throughout 2020 to celebrate HMS Collingwood’s continuing tradition of equipping sailors with vital seafaring, warfare and engineering skills. Collingwood is named after Vice Admiral Cuthbert Collingwood (1st Baron Collingwood), Nelson’s friend and right-hand man at Trafalgar, and who is himself a much-loved and widely-admired Naval hero. It began as a training camp for hostilities-only (HO) sailors of the Seaman branch early in the war, but within months wireless telegraphy training for ratings was added to the programme and, in 1942, it added a radio direction finding school. In the aftermath of the war, in 1946, the establishment took over teaching the maintenance of electrical and radio equipment, the only exception being aviation assets. In January 2002 the Maritime Warfare School was created at the site, taking on much of the work previously done at HMS Dryad on Portsdown Hill, and five years later the Maritime Warfare Centre also moved from Dryad to Fareham. Images from the anniversary service, courtesy of Keith Woodland (Crown Copyright), show HMS Collingwood’s youngest sailor, AB Jay Robinson, and Capt Catherine Jordan, CO of Collingwood, cut the celebration cake; sailors gathered for the service; and former COs joining Capt Jordan after the service – Andrew Trevithick, Charles Crawford, Cdre Andy Johnson, Mike Mansergh, Cdre Rob Vitali and Admiral The Lord Boyce. The other two (black and white) images, courtesy the Imperial War Museum collection (© IWM (A 18928) and © IWM (A 18929)), show a special parade at the fledgling Collingwood training station in August 1943, just over three years after the establishment opened for business.